Former Nairobi City governor, Mike Mbuvi Sonko, has invested in a multi-million nightclub that can best be described as avant-garde. The club that was officially opened early this year, gives Kenyans a taste of Dubai luxury clubs right at home.

According to the proprietor, VIP Volume Club serves “over 1947 different types of liquor. Most of them are imported”.

The club is located in Shanzu, Mombasa County. According to their Facebook page, the entertainment joint is described as the “best membership club in Eastern and Western Africa.” This club joins a long list of Sonko’s similar investments. The multi-millionaire also owns the Sonko Family Resort, Buru Buru-situated Casuarina Bar and Restaurant, Kimerameta Safari Lodge at the peak of Golini Hill, Kwale county, and Kilifi-situated Salama Maridadi Beach Hotel. None however has attained the, literally, gold standards of the VIP Volume Club.

The club has a capacity of 15,000-people capacity and a soundproof VIP boardroom for business deals to be made at the club. The club is designed with attention paid to the smallest of details. The walls are Versace-themed complete with gold-coated lion statues that speak power and class. Moreover, the lighting work dedicated to the facility is outstandingly well done flashing a variety of LED lights.

In a strategic marketing effort in the club, there is a spot particularly designed for taking photos and selfies for Instagram and social media platforms. The pristine white leather couches are also a great spot for taking photos at the club.

The dance floor is another spectacular piece of work in the VIP Volume Club. According to Sonko, the bulletproof floor is designed with improved architectural technology that will give dancers an off-the-ground feel. He says, “It has been constructed in such a way that it will be giving off a feeling like you are in a lift. There will be slight movement up and down because it has been made with a new technology that has never been used before.”

The club restrooms also have impressively gold-coated toilet seats and complimentary gold detail on the walls. Most of the decorations have drawn inspiration from his flamboyant Machakos-situated Mua Hills Home. Sonko revealed that most of the decor items used in the club were imported and cost him millions. On the outside, the VIP Volume Club is set to host 150 vehicles all covered with security surveillance around the clock.

Sonko hosted a New Year’s Eve party at the club that saw Tanasha Donna, Vera Sidika, her Tanzanian artist husband Brown Mauzo, and their daughter Asia grace the occasion. Tanasha Donna went on to have a short performance lighting up the audience that had the day to take selfies with the famous Mike Mbuvi Sonko. Vera Sidika and her husband even shared a romantic moment on the dance floor with fans looking on and shouting in excitement. 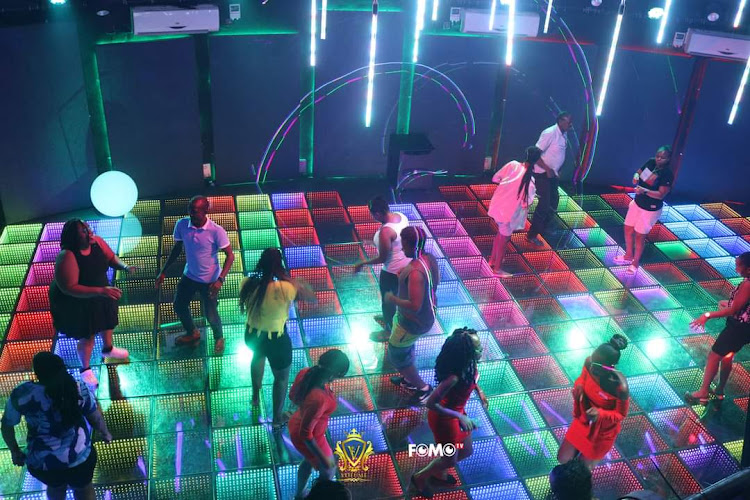 Sharing the party highlights on her social media, Vera had this to say about the club; “This is not a club, it is an arena. Partying in the VIP Club Volume is like reveling in Dubai” The club revellers at the VIP Volume Club were spoilt for drink choices as Sonko said that the club serves more than 1,947 liquor varieties, most of which he added, were imported.

On 2nd January 2022, the club also hosted another party that made headlines on social media. In attendance were Dj Creme de la Creme and Eric Omondi, proclaimed Africa’s king of comedy. The club’s official launch can only be expected to round up even bigger names from around the country, and indeed beyond African borders.

Sonko is set to host Boyz II Men (B2M) at the VIP Volume club after their tour of Uganda. The trio known world-over for their acapella harmonies and emotional ballads comprises Wanya Morris, Nathan Morris, and Shawn Stockman. The group has won four Grammy Awards since its inception. This will indubitably attract thousands of attendees as a performance might be staged at the club.

One Charles Nzaro shared his review on the VIP Volume Club on Facebook saying, “This place is so amazing. Enough light, space with fresh air. Waiters, bartenders are so kind, hope they get to maintain that. Cleanness of the washrooms, and good sound. Entertainment in 001 is definitely going on a top-level, Volume VIP Club has set the pace ”

Updated: Onesimus Kipchumba Murkomen Salary And What He Owns