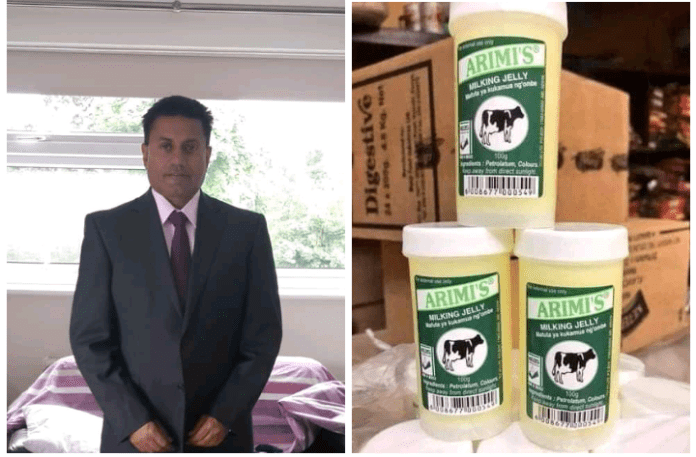 For over 38 years, Arimi’s milking jelly has been a common product in thousands of households in Kenya. Despite being manufactured for the dairy industry, the brand found another purpose; Kenyans started using it to keep their skin moist and to prevent dry lips.

Across various social media conversations, it is rumoured that ladies find Arimi’s jelly a necessity and as such a number carry it in their handbags. Additionally, Arimi’s can be used to prevent diaper rash in infants.

And for young Kenyan men, the conversation about this ‘mafuta ya kukamua ng’ombe’ would rather be avoided for a reason well known to you and I.

The brand was founded by Hanish Shah in 1983. Shah is a Kenyan man of Indian descent and prior to venturing into manufacturing, he operated a boutique.

However, the former Oshwal Academy student got the idea of petroleum jelly manufacturing through his experience with unnamed German companies.

Arimi’s was initially produced to target dairy farmers in Meru. In fact the name Arimi means a farmer in the local Meru dialect.

By 1985, Arimi’s success in the market prompted Shah to relocate the company to Nairobi in a move that was aimed at tapping into a wider market. Eventually, the brand started distributing its product to the vast Kenyan market. Currently, Arimi’s is produced by Tri-Clover Industries with Hanish Shah being the managing director.

Factors Behind Success of Arimi’s

In the 2000’s more companies began producing milking jelly touted as having antiseptic ingredients which could heal and prevent mastitis in cows’ udders.

However, Arimi’s which contains only 2 ingredients; petrolatum and colour still managed to remain afloat due to the affordability of their products. Additionally, the other milking jelly brands have  strong smells that make it impossible for any human being to contemplate applying on the skin. This meant that Arimi’s which according to Shah is safe for the human skin and therefore has no side effects has a wider market advantage.

On 23rd October, 2021, a tweep identified as Nanzia Hellena took on Twitter posting a rebranded packaging for Arimi’s jelly.

“I decided to rebrand your favorite brand as a slightly premium package. This is a passion project, I hope you like it,” she captioned on Twitter.

However, netizens were not impressed with the new package ostensibly because they are attached to the original one which has an image of a Friesian cow inscribed.

With more people were joining the conversation, the topic ‘Arimi’s’ began trending on Twitter. This forced the manufacturer to shoot down rebranding rumours.

“To all our esteemed customers and users of our products, we are not rebranding. The circulating brand is just someone’s suggestion,” Arimi’s posted on Facebook.

Top Ten Political Analyst In Kenya And Their Education Background

Vincent Isambo: How Graduate Makes Up to Ksh50,000 From Tree Seedlings After He Couldn’t...

The Rise And Fall of Kenchic Inn Outlets