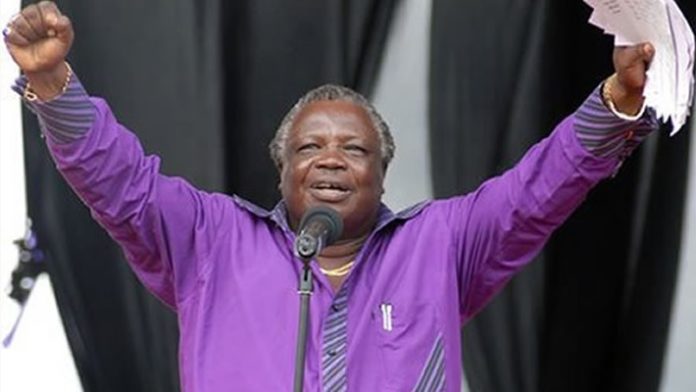 Francis Atwoli was born on 6 June 1949 in Kakamega county. The Central Organization of Trade Unions-Kenya (Cotu-K) Secretary General is married to 38 year old Mary Kilobi. His relationship with his second wife Roselinda Atwoli ended acrimoniously. Atwoli has a first wife who he says is well behaved. The trade unionist said of his marriage:

“I allowed her to come and visit the kid but not spend the night. I have a first wife who does not behave like Roselinda. She respects our marriage.”

Cotu-K is synonymous with Francis Atwoli. A man who speaks his mind with so much abrasiveness that he comes out as a rude know-it-all. The Cotu SG is known as a champion of workers rights and has a penchant for dabbling in politics. Atwoli rise to the apex of trade unionism has been anything but dramatic starting with his rather undecorated education background.

Talking of education. Little is known of Francis Atwoli’s formative education, a subject he’d rather not discuss. In an interview appearing on the Daily Nation, Atwoli told the interviewer when pushed to talk about his education background: “Maneno ya elimu wachana nayo” (leave education matters out of this interview). The article went on to write that he attended St Mary’s High School in Machakos in 1963. This conflicted with a story appearing on the same publication that claimed the trade unionist studied at Nairobi’s St Mary’s High School.

The fiery Atwoli worked as a technician with the East African Post and Telecommunications after completing his ‘O’ levels. This is where he traces his meteoric rise to his current position as Cotu SG. He was to earn a scholarship fat the ILO College of International Labour Studies in Turin, Italy. Then another scholarship came his way at the Cotu Institute of Education in Limuru and George Mini Labour Centre in Maryland, USA, between 1974 and 1992.

The man, who fashions himself as the spokesman for the common Kenyan, rise to the top was not without its hurdles. Atwoli’s attempt to clinch the general secretary position of the Union of Post and Telecommunications Employees came a cropper after he was floored.

Lady luck smiled at the unionist and he went on to be elected Kenya Agriculture and Plantation Workers Union general secretary in 1994. This was the launchpad he needed to vie for a Cotu position when its former boss Joseph Mugalla retired. Atwoli has consolidated his position at Cotu with very minimal challenge from his detractors.

The flamboyant trade unionist is said to be a man who doesn’t take advice. It is either his way or no way. A former aide told the Daily Nation: “He will tell you to go to hell if you come in between him and an idea.”

He is conniving when dealing with his critics: ““He has managed to neutralise any dissenting voice. No one dares to raise a voice against him as he will ensure all your followers leave you,” an official of a hotel workers union was quoted by the same publication describing Atwoli’s other side.

It was the death of his former deputy and Kabete MP Hon George Muchai that threatened to soil his name. Loud whispers by some leaders seemed to suggest Atwoli had a hand in his brutal murder. In 2014, Atwoli had sued his suspended deputy for defaming him. Atwoli was enraged by allegations made by Mr Muchai’s that he had embezzled workers union funds. The former also claimed that latter had accused him of being a ‘medicine man’ and was demanding kes500 million as compensation.

In his defense, Atwoli said he sponsored Hon Muchai to go to parliament to articulate issues of workers. Investigations into the murder of Muchai, like of most high profile Kenyans, has remained unresolved.

Atwoli holds a number of positions away from his powerful Cotu seat.

Atwoli is a Board of member of;

Salary and Net Worth Of Francis Atwoli

He has been described by his associates as wealthy and generous. According to a story appearing on People’s Daily, Atwoli stately mansion in Kajiado has a helipad, parking lot that can accommodate upto 100 cars, a restaurant that can hold 300 guests at a go and a number of guest rooms. He has another address in Kilifi.

He is proud of his toy that changes color depending on the prevailing weather conditions.

This car is mostly used by Heads of State in developing countries. Atwoli said in an interview with the Nation that his friends in West and Northern Africa had contributed an advance payment of about kes35 million for his latest toy. How true is that? Only Atwoli knows.

The trade unionist claimed in an interview on JKL Show aired on KTN that his suit alone can go upwards of Kes1 million. He dons the most expensive watch in the world. The cheapest Franck Muller watch retails at $2,400 (kes240,000).

In a separate interview, he has to keep appearances: “Kila kitu yangu ni mzuri. Huwezi kwenda kwa matajiri na koti imeraruka na unaenda kuulizia watu mshahara? (Everything I own is good. I cannot go to employers in tattered suits to ask for an increment for workers).

It goes without saying that Atwoli is rich. This is true of a man who can loan a friend sh110 million without asking for any form of security. Atwoli advanced debt ridden Cyrus Jirongo kes110 million loan which was to be repaid with an interest of sh10 million within 50 days. As expected, Jirongo failed to pay the friendly loan as agreed. The matter is in court and it’s not clear if Jirongo repaid the debt.

Atwoli estimated net worth is just above kes700 million.

Street Named After The Trade Unionist

A street has been named after Francis Atwoli and it did not come without controversy. The road, formerly named Mandera Road, was changed to Francis Atwoli Road in recognition of his selfless contribution and agitating for the rights of Kenyan workers in the last 54 years,” atleast according to Deputy Governor Anne Kananu.

An elated Atwoli said of the recognition:

“I want to thank the leadership of Nairobi under Anne Kananu, for this great honour and recognition of services to the Government of the day, the community and workers at large. We will continue offering our unwavering support to the leadership of the county….”

Barely two days after it had been erected-unknown persons uprooted it and this did not go down well with the trade unionist.

He shared this on tweeter:

The Nairobi County Government has reinstalled the sign. If you think you came from the moon go try remove it again. Also, a CCTV has been installed for the security of the area.
(Picture Courtesy). pic.twitter.com/kRgeiwtvm5

Jared Kangwana: Meet The Founder Of KTN Who Owns The Mall Westlands

Pendo: The Kenyan Socialite Who Was Left With Kes208,000 Hotel Bill By Boyfriend