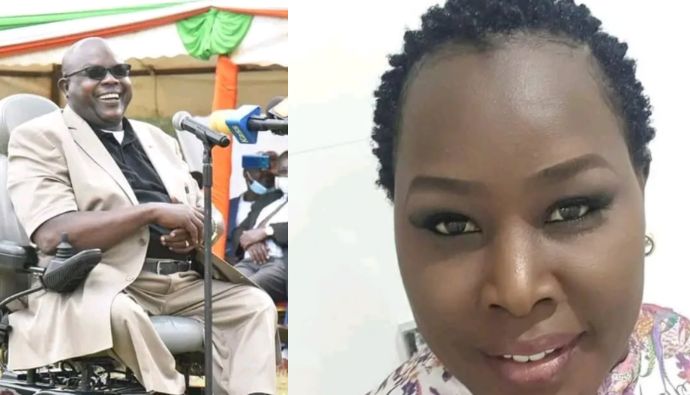 Jackson Kipkemboi Kosgei is a man abled differently and has a story of resilience behind his achievements. He was recently nominated by the United Democratic Alliance (UDA) as an MP representing people with disabilities. But before this, Kosgei who is the father to musician Emmy kosgei had a tough upbringing and got infected with polio which crippled him when he was only 5 years old.

This brought his education dreams to a grinding halt. According to the former Bishop of Worldwide Gospel Church of Kenya, there were so many narratives  advanced to explain his disability. All these stories were centred at laying blame on people around him and this made him bitter and angry.

“People had to advance many theories. Some thought this was a judgement which the gods might have seen that I was going to be terrible, then others thought of curses while others just a spell because of a ‘bad eye’.

However, while aged 20, Kosgei resolved that he had to live a purposeful life. He decided to enroll for primary school education while focusing on being useful to family, church and the community. His dream was to be a lawyer, either as an advocate or a magistrate.

At one point in his life, Kosgei contemplated taking his own life due to the difficulties he was going through. However, he changed his mind after someone he knew died by suicide by jumping off a tall building.

“I thought about committing suicide at one point in my life but changed my mind when someone I considered to have everything ended his life by jumping off from a tall building in Nairobi in the 70s. I discovered that all human beings have some disability in them which can either be physical or internal,” says Kosgei.

Kosgei’s strong Christian faith forced him to be an active church member serving in the choir. He later on became a clergyman and bishop of the Worldwide Gospel Church of Kenya and retired to threw his hat into the political ring.

In 2009, Kosgei made a prophecy that William Ruto would one day ascend to be Kenya’s first in command. He revealed this while in Cheptebo, Elgeyo Marakwet County in the presence of Ruto. However, he recounts that many people did not take him seriously. According to Kosgei, prophecies are provoked mainly by two things: the intention of God and the need when society is anguishing.

In 2013, Kosgei contested the Baringo County senate seat on a United Republican Party (URP) but lost to Gideon Moi. In 2022, he also had eyes on the same seat but wasn’t successful at securing the UDA ticket which went to current senator William Cheptumo.

Fortunately, Kosgei was nominated to the National Assembly to represent persons with disability by the UDA party. Kosgei received a flurry of congratulatory messages from his supporters as well as his daughter, Emmy Kosgei.

“Hon. Jackson Kosgei Bishop Emeritus. He brings wealth of knowledge to the floor. Looking forward to constructive and impactful conversation in parliament; he is up to the task,” Emmy Kosgei posted on Instagram.

Read Also: Nelly Cheboi: The Baringo Woman Who Made it To Forbes Top 30 Under 30

Kenyan Radio & TV Presenters In Their 40s And Still Relevant