Home Bio Joseph Muya: From Cleaning Horses To Owning Lake Nakuru Lodge
Facebook
Twitter
Google+
Pinterest
WhatsApp
Joseph Muya is the proprietor of the Lake Nakuru Lodge and Summit Hotel and also the coordinator of the Rift Valley Lakes Tourism Association. The Businessman has built himself a reputation in Nakuru and the country as a major investor in Kenya’s hospitality industry.
However, many may associate with the man he is today, little in known of the hardship he endured growing up and the menial jobs he worked in the past. He began as a horse cleaner but today he is one of the leading operatives in Kenya’s bubbly tourism and hospitality industry. In 2010, he was also a director of Nairobi’s jockey club.
The businessman’s tale of rags to riches is inspirational and serves as the perfect motivation for the many “hustlers” in society. Here is his story as told by WoK.
Background & Education
Muya was born in Naivasha and raised by his parents who at the time, worked at the Delamere Farm.
He lived and went to school at the farm. During a 2010 interview with Citizen TV, Muya recounted the fond memories living and growing up in the farm.
Muya’s father who was the family’s sole breadwinner passed away, forcing him into employment to fend for his family.
Working career
After losing his father, Muya joined Delamere Farm as a Jockey or horse handler where he developed a passion for horses. After some time, he resigned to pursue greener pastures.
He would later return but was employed as a professional hunter. This marked the start of his journey to success. He started off as a cashier and moved through the ranks into the managerial level.
“I started now tasting hospitality. There were so many courses in-house. But every day I opened my eyes, every opportunity that came, I grabbed it honestly and moved forward,” he said.
Today, Muya owns the Lake Nakuru Lodge, the Summit Hotel, and Sundowner Lodge. Despite the success, he remains a modest man and interacts freely with locals and members of the public.
“From nothing, we started these hotels with Ksh100,000 with an overdraft, the rest were debt and we moved on,” he said.
Horses
Muya has a special connection to horses. He owns a stable known as Flamingo which by 2010 had over 25 racing horses. He is also a horse breeder.
“They give me determination and the spirit of fighting because they were considered the King’s rides,” he said.
In 2010, he was also a director of Nairobi’s jockey club. 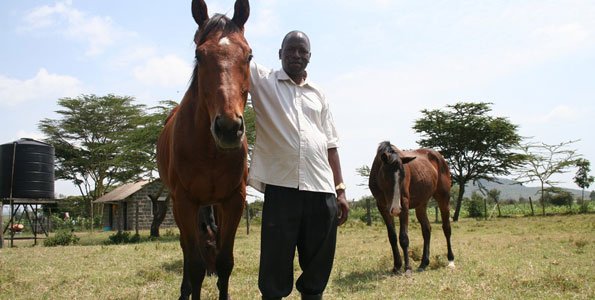 Other Businesses
he also ventured into the beverage industry where he owns Africa Classic which manufactured the Rhino energy drink.
Muya has also served as the Lake Nakuru National Park Management Committee Chairman.
Paternal case

In 2014, then 32-year-old Elizabeth Warimi Gitau filed a case in court demanding that Muya be subjected to a DNA test to ascertain whether he was her biological father.

In papers filed before the court through lawyer Wilfred Konosi, Warimi said her mother told her that Muya was her father.

However, in his replying affidavit, the businessman said he had never been in any union with her mother and cannot be Wairimu’s father.  He accused the woman of scheming to benefit from his wealth illegally.

Warimi told the court that she had on several occasions met with Muya who had confirmed to her that he was her father.  She added that she had enjoyed a cordial relationship with him, a claim the businessman denied.

“There is nowhere I admitted to her that I was her father and any financial support in the past was on humanitarian grounds and not fatherly obligations as alleged,” he stated.

The mother of three urged the High Court to compel the businessman to be subjected to a DNA test. She wanted Muya to recognise her as his daughter, saying refusing her had subjected her to mental anguish, dejection, ridicule and hatred.

Through his lawyer Kipkoech Ngetich, Muya said he gave her the money for school fees more than a decade ago after he was approached by people who knew the woman while she was still a student and had decided to assist like any other ordinary person.

“I never had a relationship with her mother before or after January 5, 1982, when she was born and therefore I cannot be her father. For her to demand my DNA sample is to infringe on my Constitutional rights as a Kenyan citizen,” Muya said.

Factors To Consider When Building an Affordable House in Kenya

Dennis Okari, Mark Masai Team Up To Start New Show After Being Fired From...

Carrey Joy: Abandoned A Luxurious Life In US, Got Married To A Boda Boda...

Salary Of Kadhis And Chief Kadhi In Kenya