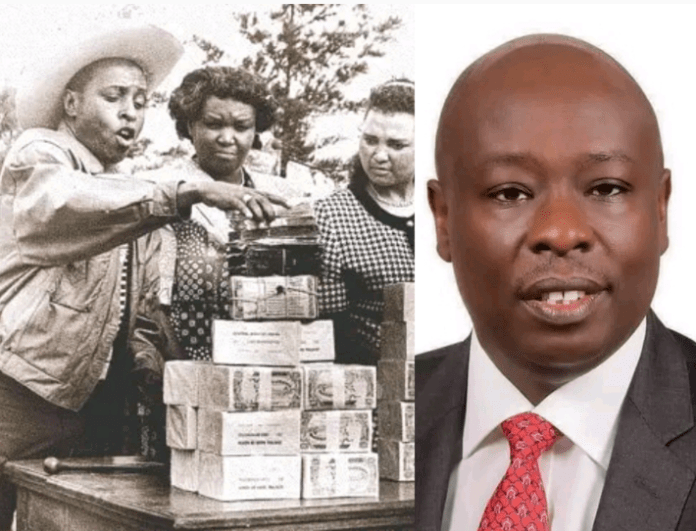 Rigathi Gachagua, the Kenya Kwanza presidential running mate is a man who was barely known in the national political circles until he won the Mathira Constituency seat in 2017.

For the last 5 years, Gachagua has made a name for himself by being a strong supporter of Deputy President William Ruto. He has been at the forefront in launching scathing attacks against President Uhuru Kenyatta and ODM leader Raila Odinga.

The Mathira MP was declared the preferred running mate to DP Ruto albeit Central Kenya MPs overwhelmingly voted for Tharaka Nithi senator Prof. Kindiki Kithure. The reason for this was because Gachagua had over the years mastered the art of abrasive politics thanks to his mentor Kuria Kanyingi who was a powerful KANU supremo in the ’80s and ’90s.

Born in 1945, Kanyingi worked as an ordinary mechanic before he once helped fix one of President Moi’s vehicles and got promoted as a vehicle inspector at the Coast. He served as Limuru MP between 2002 and 2007.

Kuria Kanyingi was the KANU chairman in Kiambu in the ’90s. He is reported to have won the trust of former President Daniel Moi and ensured that any opposition to the powers that be was instantly squashed. In fact, Kanyingi is alleged to have forced former Vice President Josephat Karanja to resign from the government by accusing him of ‘arrogance and insubordination’.

Read Also: Josiah Frost: Being Taller Than Moi Denied Me Lucrative Job, But I Finally Won His Trust

According to an article on Business Daily titled ‘The diminituve master of political chicanery,’ Kanyingi is thought to have masterminded the isolation of George Muhoho and Njenga Karume from the power circles.

In the wake of multi-party democracy in Kenya, the Central Kenya region was largely seen as an opposition region inclined to Kenneth Matiba. However, Kuria Kanyingi had a way of wooing ordinary citizens to his side.

Kanyingi is said to have been dishing out millions of shillings in fundraisers which was (and still is) a colossal amount. Not even cabinet ministers could match this amount.

At this time, Gachagua, then known as Geoffrey Gachagua worked as a District Officer in Limuru. However, according to a Standard Media article dated 22/5/2022, Gachagua was more of a sycophant to Kanyingi than a government employee. The article notes that Gachagua was a prominent figure in Kanyingi’s homesteads as the duo worked like clock work in advancing their political agenda.

In a way of playing divide and rule politics,  the two would always separately meet rival groups and conspire to bring them to a fight. This was done by falsified allegations which always brought the groups at loggerheads and ensured they clashed.

“It is Gachagua who used to light fires here and there then arrange for ‘peace’ talks at the politician’s house,” notes the Standard.

It was rather absurd when it emerged that there was a standby camera and journalists at the Kenya Broadcasting Corporation (KBC) that were specifically reserved for Kanyingi. As such, Kanyingi was always a prominent personality on the headlines of news segments.

Kanyingi is also accused of grabbing 100 acres meant for Tigoni Potato Research and sold it for Ksh 275 million. Additionally, it is alleged that he always donated buses to various women groups only to confiscate them later on.

Death and contents of the will

Kanyingi died in 2014 while in India after a battle with colon cancer. His burial ceremony was a low profile one with leaders banned from engaging in politics. According to his wish, pictures and flowers were also not allowed during his burial.

He was survived by two widows and several children. By the time of his death, Kanyingi was worth Ksh 2 billion and had penned his will, strictly advising how his vast wealth was to be shared.

According to the will written on 25/1/ 2013, his wives and children were to be contented with what each one was to receive. In case of any displeasure, Kanyingi directed that the said parties would have to forfeit what he had allocated to them.

“I direct that anyone who wishes to contest my wish herein will have to return the properties I have given him or her and if he or she will have disposed of such property must deposit, with my trustees, the sum equivalent in value as at the date of his or her contest before challenging this will,” states the will.

Three trustees; a pastor, lawyer and accountant had been appointed to oversee the inheritance. Before his death, Kanyingi had bank accounts in four banks and had shares in several companies including Barclays Bank, Kenya Commercial Bank, NIC Bank, Standard Chartered, Rea Vipingo and Olympia Capital.

Where The Richest Women In Kenya Have Invested Their Billions

The Billionaires Who Control Cement Business In Kenya

Global Trade Center: Architects And Contractors Behind The New Tallest Building In Kenya