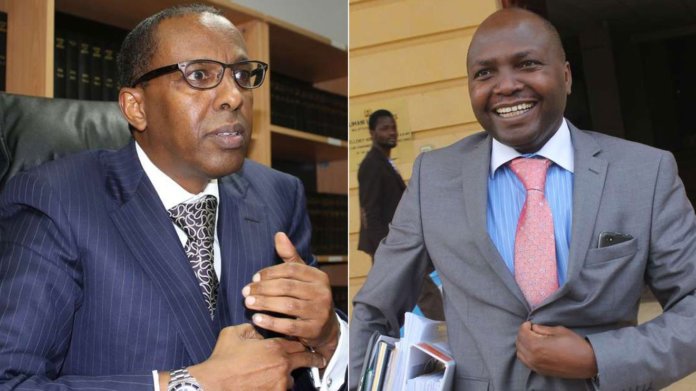 Each concentration of has a different demand, pay structure and complexity to the work. So when it comes to legal careers and the highest paid lawyers, it can really vary, depending on the expertise, ranking and reputation of a particular lawyer.

Kenya is home to some of the best legal minds in the continent. These lawyers offer services to government agencies, top government officials and even companies. In the coming days and weeks, Kenyans are set to witness the brilliance of some of them, as they argue their case at the Supreme Court for the presidential elections petition.

Listed below are some of the most sought-after Lawyers in Kenya, what they charge and their previous victories.

Donald Kipkorir is undoubtedly one of the highest paid lawyers in Kenya. In June this year, he was set to be paid Ksh. 1.3 billion, one of the highest legal fees awarded in the country’s litigation history, for defending the Nairobi County government against the Ministry of Defence in a case involving the parcel of land where Embakasi Barracks stands.

The Environment and Land Court ruled that Mr Kipkorir should be paid Ksh. 1.338 billion for representing the defunct city council in the case that was in court for close to 10 years.

Depending on the type of case, his charges run into millions.

Other than being a Twitter bigwig, Senior Counsel Ahmednasir is also a pricy Lawyer, his cases costing clients a pretty penny. In 2013, he was one of the legal minds that represented the Independent Electoral and Boundaries Commission (IEBC) in the presidential election petition.

Reports indicated that the vocal senior counsel was paid Ksh. 40 million for his services, which translated to about Ksh. 2.9 million per day. He was also part of the legal team that represented President Uhuru Kenyatta in the last general election petition at the Supreme Court.

Given the nature of court cases he handles, his fees are in the millions.

Paul Muite will go down history books as one of the most notable individuals who struggled for the second liberation of Kenya. He, together with Orengo, Raila Odinga and other strong willed individuals fought the good fight that led to the democracy we are enjoying to date.

When the senior counsel- jointly with Kioko Kilukumi- represented the Ministry of Lands in a legal tussle with the National Lands Commission in the Supreme Court, he billed his client Ksh. 15 million. This makes him one of the highest paid Lawyers in the country.

Lawyer Cliff Ombeta is an astute criminal lawyer with a history of taking up complex cases. He has represented the Akasha brothers among other criminal elements no lawyer wants to touch. Ombeta asks for millions in legal fees.

Fred Ngatia’s demeanor is an attribute of his that draws people to him. Most Kenyans know him for the role he played in the last two presidential petitions as a lead lawyer for President Uhuru Kenyatta. The lawyer collects millions in legal fees for representing state corporations, constitutional commissions and public offices. His law firm was reportedly paid Ksh. 290 million for representing the Kenya Airports Authority in a court case.

Thanks to the high success rate of his cases, Fred Ngatia charges well over Ksh. 3 million in legal fees.

Oraro made headlines when he successfully represented former ODM chairman Henry Kosgey during the hearings at the ICC. He went on to represent the defunct CORD coalition in the 2013 presidential elections petition at the Supreme Court. His fee was reportedly more than Ksh. 20 million during the presidential petition.

In 2015, Lithuania appointed him as first consul for East Africa. This appointment comes with a fat cheque for the prominent lawyer.

SC Phillip Murgor is no stranger to controversy and controversial cases. He is also one of the lawyers that charges the highest legal fees in Kenya.

In November 2020, Murgor was in court, battling to get paid Ksh 360 million after representing the Kenya Pipeline Company (KPC) in a multi-billion case in 2014.

In submissions to the court, the lawyer sought to cross-examine the government parastatal’s chief legal officer Stanley Manduku for non-payment after offering legal services. Murgor justified his request stating that he was seeking to establish whether the senior official was attempting to defraud him of his legal fees.

Tom Ojienda is among the creme de la creme of legal expertise in Kenya. For example, he has previously billed his client, the National Lands Commission, Ksh. 221 million for representing them and winning a case.

Kigen rose to fame when he represented journalist Joshua Sang and Deputy President William Ruto at the International Criminal Court (ICC). At the time, was the only Kenyan leading lawyer at the Hague-based court. He also has a hand in other prominent court cases.

In addition to being an outstanding and seasoned lawyer, Jane Wanjiru Michuki is also arguably the richest female lawyer in Kenya.

Kilifi: Locals Selling Baobab For Ksh300K Per Tree To The US