The Nairobi railway city project is a multi-modal urban development that was proposed during the reign of president Uhuru Kenyatta to revamp the Nairobi Railway Station. The Atkin global from the UK won the bid to design the proposed Nairobi central railway station after being commissioned by the Kenyan government. The total cost of the project is $246.6 million city (approximately Sh29.6 billion in the current exchange rate).

Here is what WoK has compiled:

The city will be located between Haile Selassie Avenue, Uhuru Highway, Landhies RD and Bunyala Rd. The modernized city is expected to cover 425 acres, of this, 292 acres is owned by Kenya railway.

The project was came to life after the formation of the Railway City Development Authority (RCDA) which was to work closely with the Nairobi metropolitan services (NMS) to identify anchor projects and the investors for the project.

The project was to be fully funded in a public private partnership (PPP) deal with the UK export finance by partnering with RCDA, NMS and the Kenya Railway corporation (KRC).

Phases of the project

The whole project, which was commissioned in 2020, is expected to take a span of 20 years to complete and it was divided into 3 phases.

The first phase is to be executed between 2020 to 2030 and amount of the budget was to be allocated for railway infrastructure and the water supply at Sh17.5billion and Sh3.9 billion respectively. These stage involves the construction of meeting facilities, incentive conferences, and exhibitions, which will be situated along Bunyala Road.

The second phase will be an economic zone comprising hi-tech industries and small and medium enterprises and is expected to be done between 2030 to 2035. 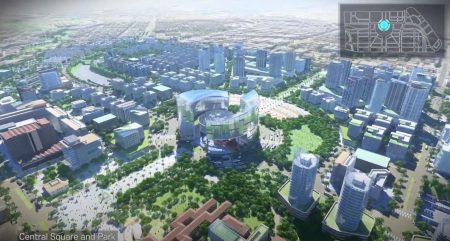 The third and last phase will comprise residential complex which include a school, park, and affordable housing units  It will be built in Landi Mawe and Industrial Area. The phase is scheduled to be executed from 2035-2040.

Purpose of the project

After the lapse of the 20 years of revamping, the economic free zone will create over 200,000 jobs while the residential complex is expected to accommodate an approximate figure of 28,000 residents.

According to the Ministry of Transport, Infrastructure, Housing, Urban Development and Public Works, the project will serve as a functional, architectural and urban centrepiece to Nairobi’s escalating global image as a leading modern city in the world.

The renovated city will consist of an underground tank purposely meant to collect in water for supply in the development of the city, a police station, fire station and a disaster response center.

The Nairobi Railway City will be the largest and most ambitious development to be undertaken in the metropolitan region since independence and is expected to attract local and international private capital.

Jackson Nyakoe is a journalism and communication student Moi University

Mercy Mugao: From A Jobless Graduate To Reaping Big Through Weaving Baskets

Dr. Beverly Cheserem: Meet One Of The Only 4 Female Neurosurgeon In Kenya