Powerful Kenyans who are members of Freemasons

How to join Freemasons in Kenya

Freemason in Kenya is synonymous with ‘devil worshipping’. This narrative gained currency in the 90s. The wave of kidnappings, rapes and other socials ills during that period had to be blamed on something. Ordinarily, and in Kenya fashion, the devil was the culprit. Then we had the Devil Worship Commission established on 20th October 1994 by retired President Daniel arap Moi.

The report was presented to the President in 1995. He declined to have it made public citing ‘sensitive information’ contained therein that would have “legal implications”. It was not until 1999, when ex-Minister of Internal Security Julius Sunkuli had the report released in parliament. The report recommended a formation of a special force to tackle widespread Satanism in schools and colleges. It went on to call the Mormons and Freemasons “gateways to devil worship”.

In a stinging attack on the report, journalist Gitau Warigi characterized it as a “….narrow-minded prejudice from the mainstream churches, who sniff the hand of Satan in anything that does not fit into their religious world view”.

The damning condemnation of the Freemasons has stuck over the years. In 2000, the outlawed Mungiki adherents unsuccessfully tried to set ablaze a Freemasons Hall. The marauding protestors claimed that they were “…targeting a snake which fed on human blood from kidnapped children”.

Is Freemasons a satanic enterprise?
Reports of Satanism being practiced in the secret society were rebuffed by the district grand master for East Africa VK Talwar who in an interview with the Standard said:

“Whatever it is you believe in is not our concern, we don’t interfere with that. All somebody has to say is that he’s not an atheist. If you are an atheist, you can’t become a freemason..”

In effect, the Freemasons does not discriminate one’s beliefs:

“Any other religion you believe in, whatever is your form of belief, it’s your choice. We believe that if you believe in a creator, you’ll have respect for each other. And because we allow people from different religions to join, you’ll learn to respect each other’s religion, to be tolerant toward each other,” the district grandmaster told the publication.

There is bible that is used to conduct oaths on new members though it’s never read during initiation ceremonies.

The total number of Freemason lodges in East Africa are 48, with 34 being in Kenya as of 2013. They have temples in Nakuru, Ruiru, Naivasha, Eldoret, Kitale, Kericho, Kisumu, Nyeri and Mombasa.

How to Join the Freemasons

The ancient fraternity has over 6 million members worldwide. They are three stages known as degrees a member has to pass to reach the highest degree. In each degree, a candidate is given certain secrets; a sign, a handshake and a word. During initiation, candidate must bear one of his breasts-this is to show he is not a woman. Once initiated, the newbie is given a white apron to show innocence.

You can join the brotherhood on their website too. According to freemasonskenya.com, prospective candidate wishing to join the Grand Lodge of East Africa:

Must be 21 years above to be eligible to join

Over 18 years old if he is a Freemason son

Must not seek financial, business or social advantage from Order

Must have a religious belief

Annual membership fees must be paid

That you must be gainfully employed, that is earning a salary enough to be a member of our Order without this being financially detrimental to your family.

Powerful Kenyans who are members of the Freemasons

According to an article appearing on the Standard titled Top Clergy Join Freemasons, list the following as members of secret society. 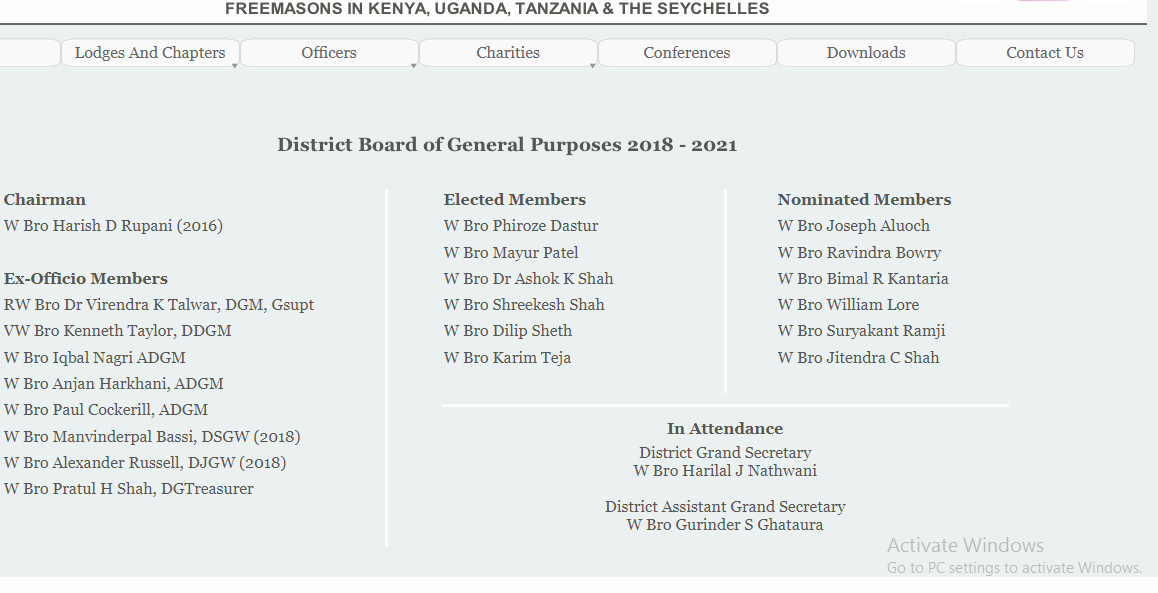 The membership may have changed.

Ten Used Cars You Should Avoid Buying Due Bad Transmission As Per Consumer Reports...