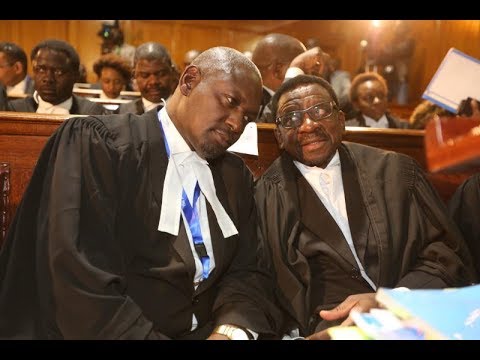 On Monday 15th August, 2022, the Independent Electoral and Boundaries Commission (IEBC) Chairman Wafula Chebukati announced the results of the Presidential election. William Ruto of UDA beat his closest rival, Raila Odinga, with a very narrow margin in the hotly contested race to statehouse.

However, the announcement was marred by scuffles and allegations of vote-rigging by Raila’s campaign team. What’s more, four of the seven commissioners of the IEBC Commission removed themselves from the announcement of the results, terming it as “opaque”.

The Azimio Presidential Candidate Raila Odinga later issued a statement, deeming the election results as null and void. He further stated that the coalition would exploit every legal measure they can to reverse Chebukati’s announcement.

James Orengo is a Kenyan lawyer and a renown human right activist. He is also a close ally of former Prime Minister and Azimio Presidential flagbearer Raila Odinga. In the recently concluded August 9 general elections, he emerged as the Governor-elect for Siaya county.

Professionally, he is one of the few Kenyan lawyers who have attained the professional grade of Senior counsel, a title he earned under former President Mwai Kibaki.

In 2019, Orengo was appointed by Uhuru and Raila as part of the task force team to implement the controversial Building Bridge Initiative (BBI).

Mr. Murgor is a renown Kenyan Lawyer, with well over 30 years experience in the legal field.. In 2021, he was among the interviewees seeking to succees former Chief Justice David Maraga. Reports have indicated that his brilliant legal acumen helped the government recover billions of shillings lost in the Goldenberg scandal between 2003 and 2005.

He is a holder of Master’s and Bachelor’s degrees in Law from the University of Nairobi.

The Rarieda MP-elect is an accomplished Advocate of the High Court of Kenya. He previously served as one of nine experts in the Committee of Experts that drafted and delivered the Constitution of Kenya 2010 and is the former Chairperson of the Commission on Administrative Justice (Office of the Ombudsman) of the Republic of Kenya.

He was also among the legal team that represented the former NASA coalition in 2017 that led to the nullification of the then presidential election results by the Supreme Court.

Lawyer Ndegwa Njiru has an impressive legal career spanning over a decade. He is the founder of Ndegwa and Ndegwa Advocates, where he works alongside his younger brother and wife.

He also has an interest in politics, vying for the Gichugu constituency parliamentary seat in 2013 alongside 9 other people under the NARC party ticket. He came in 4th place.

Some of his notable career achievements include his representation for Kirinyaga MCAs in the case against Governor Anne Waiguru. In the case, he cross-examined the defense witness in such a tactful manner that left them dumb founded and awed at the same time.

He also represented Embu governor Martin Wambora in his impeachment. He was able to secure court orders for the reinstatement of Wambora as governor.

His past cases include complex energy and tax disputes and represents multinational firms, local firms and departments of the Government of Kenya. He has previously been awarded the International Law Office Client Choice Award as the best litigation lawyer in Kenya.

Mr. Oyatsi is an accomplished legal practitioner, an Advocate of the High Court and Managing Partner of Shapley, Barret & Company Advocates, a leading law firm in the country. He is also President Uhuru Kenyatta’s lawyer and also a legal advisor to the extended Kenyatta family.

Mwangi has served as Raila’s coalition advisor in the Grand Coalition government. He succeeded Miguna Miguna as Raila’s legal advisor in January 2012. The 55 year old is a member of Raila’s top advisory group, which is tasked with providing research and guidance to the campaign board.

He was also one of the leading counsels in the National Super Alliance’s (NASA) case that successfully challenged President Kenyatta’s 2017 election at the Supreme Court.

Awele is a qualified Advocate of the High Court of Kenya with over nine years’ experience in dispute resolution practice. He was instructed as a pupil at Kaplan & Stratton and upon admission to the bar started his practice of law at the said firm and later at Oraro & Co from where he left to found his current private practice.

Since founding his practice, he has acted in high profile Dispute resolution matters including the successful 2017 Presidential Election Petition and the Constitutional Petition that blocked the intended prosecution of the Deputy Chief Justice.

Nowrjee is often described as a soft-spoken and brilliant legal mind. One of the cases which shaped his career interest was the Mau Mau Lari massacre trials in Githunguri in 1953, which his father AR Kapila handled.

Pherozee was called as a Barrister at Lincoln’s Inn in 1965, and then as an advocate in Kenya in 1967. One of the prominent cases he has handled is the NASA presidential election petition of 2017, where the Supreme Court nullified the election results for failure to comply with the constitution.

Beldina Kirito: How I Lost Ksh6 Million In A Restaurant Business

Kenyan Celebrities Who Have Been Involved in Crime

Pharmily: The Two Doctors And A Software Engineer Behind The First Kenyan-Owned Online Pharmacy