Unlike her husband who has an active hand in Kenyan politics, she shies away from the public limelight.

She is the director responsible for marketing at RMS. 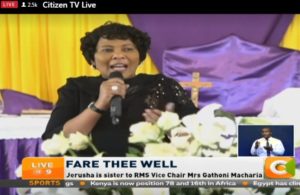 Gathoni was born in 1955 to one of the most prominent and decorated families in the country. Her parents were teachers during the colonial period.

During that era, teaching was among the most lucrative and reputable careers in the country and the parents pushed Gathoni and her siblings to succeed in life.

Details of Gathoni’s education, however, remain unknown to the public.

She is the first wife of RMS owner and billionaire S.K. Macharia. The couple have six children, two girls and four boys.

Purity Gathoni Macharia is a businesswoman and was the force that helped push her husband to greater heights. She is the director responsible for marketing at RMS.

The mother of six has other interests cutting across various economic sectors including real estate. She reportedly a shareholder at Directline Assurance.

She was also a director at a company called Reem Style Ltd between 2013 and 2016. She resigned from her role shortly before the company was dissolved.

She has known family homes in the leafy Loresho, Nairobi and in Gatanga, Murang’a County.

Gathoni has for the most of her life stayed away from the public eye, unlike Macharia, who is active in politics.

However, on July 27, she welcomed politicians led by ODM Leader Raila Odinga into her Gatanga home, Murang’a County.

The event was organized by the artists to express gratitude to the government for waiving taxes on their Skiza tunes earnings. The artists are now exempt from the 25% excise duty.

Raila was accompanied by other leaders including Siaya Senator James Orengo, Suna East MP Junet Mohammed, Edwin Sifuna among others.

Cyril Peter Otieno: Founder Of The Smallest Library In Africa

An Inside Look At Ksh8 Billion New Parliament Towers That Was Constructed For 10...