Philip Etale is the current ODM communications director. He has worked in the ranks of the opposition party since 2010.

He proceeded to Lugari High School in 1994 and sat for his Kenya Certificate of Secondary Education (KCSE) examinations in 1997.

In May 2003, he enrolled at Makerere University in Kampala, Uganda, where he pursued a Bachelor of Arts Degree in Mass Communication. He graduated in 2006.

Philip Etale began his career as a journalist at the Kenya Broadcasting Corporation (KBC).

He later proceeded to join Royal Media Services (RMS) where he worked until he joined ODM as Public Relations Manager in 2010 and now as the director of communication.

In 2020, the communications guru recounted how tough it was losing his job at the RMS when he had a loan to service. He shared on social media how he shed a tear at the HR offices when he was informed of his sacking. 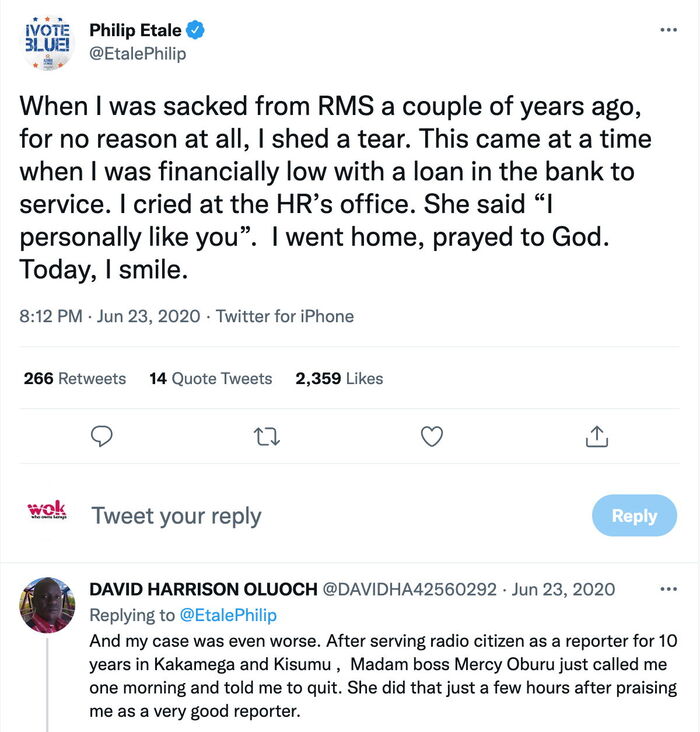 “God why my family all the time? Sorry for questioning you Lord. Friends, I am gutted. I feel finished. My elder brother Zachariah has just passed on a few moments ago. Please pray for our family. This is too much,” said Etale.

He has been actively involved in the country’s political arena as a member of the ODM party. Apart from handling media queries on behalf of the party, he has always been on the forefront campaigning for its aspirants.

At one point Etale was eyeing the Lugari Constituency parliamentary seat in the 2022 general elections.

He has been actively involved in giving back to his community on various capacities. In May 2020, Etale built a house for a woman who had been a victim of ravaging floods.

Philip Etale  and his family have been victims of great misfortune over the last few years. In January 2020, the communications guru narrated some of the pain that his family had gone through in recent years.

He revealed how losing eight family members in a span of five years had drained him emotionally and financially.

“I lost my mother, son, dad’s brother, step-mom, dad, mom’s sister, elder brother and recently dad’s sister all in a span of five years. The most heartbreaking being my son Wendell Charles Etale in April 2015. A boy who has never been sick in all his 12 years on earth,” he stated in a Facebook post.

The ODM communications director was among the first public figures to reveal he had contracted Covid-19. On 26 July, he took to social media to state he had contracted the virus for the second time. His tweet read:

“Dear friends, I am battling a second attack of Covid-19 since Monday last week, my body was acting funny with a deep cough and blocked nose and headache,”

“However, the condition worsened to the extent that I couldn’t sleep. My body weakened by day forcing me to visit the Agakhan Hospital for tests,”

“The doctor then advised me to go for Covid-19 test which I did and the test result was positive. My dear friends, this wave is serious,” he shared.

“I lost sense of test and smell. The body aches are excruciating and unbearable. The headache is severe and the whole body is tired. The waist line is painful to the extent that I can’t wake up to walk,” added Etale.

“My nights are painful with no sleep. Dear friends, this is not a joke. Luckily, my oxygen levels are above 90 which my doctor says is good.”

“I therefore request to go off social media until that time I will have recovered from this monster. All I ask from you is prayers. Thank you and God bless you all.”

25-Year-Old CEO Brian Odhiambo On His Childhood Struggles & Making It As A Graphic...