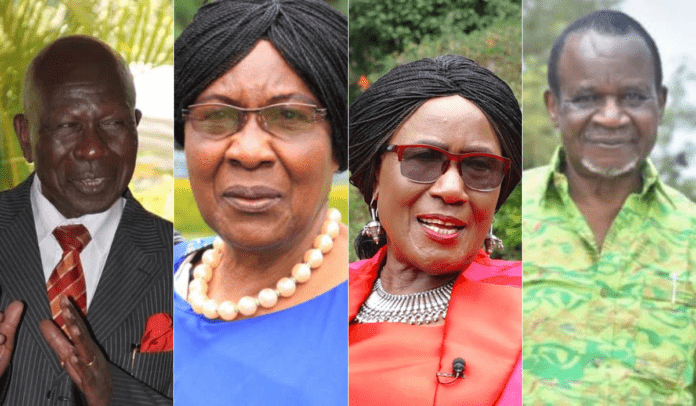 The Aworis are among the most prominent families in Kenya boasting a vast dominance across various disciplines. Their lineage has left remarkable footprints in politics, education, commerce, medicine, engineering, sports and academia.

The patriarch of the family, Jeremiah Musungu Awori had 17 children all of who, followed in their old man’s footsteps (his son Aggrey Awori died aged 82). The late Mzee Awori was the pioneering African Canon of the Anglican Church in Kenya.

He successfully established over 100 churches in Western Kenya prior to his demise in 1971. He succumbed to a heart attack seven years after diabetes had claimed the life of his wife Mariamu in 1964.

Canon Awori Street in Kakamega is named after the old man.

It is the aspiration of every living being that their lineage lives on through generations, and even better, successfully. The Awori lineage continued its dominance even after their father’s death and produced excellence in all the disciplines they ventured into.

WoK takes a look at some of the Awori children and their remarkable fetes.

Canon Awori’s first son, Musa, died of a snake bite during infancy, leaving Ellen Peris, the second-born, to take the role of the eldest of the siblings.

She trained as a nurse at Bulawasi college in Uganda and married Rev Mathew Owori.

Ellen was later pursued social work at Nsamizi College in Entebbe before proceeding to complete the course in Israel.

During her time in Israel, she became close friends with then-Israeli Foreign Minister, Golda Meir, who went on to become Prime Minister.

The family produced Kenya’s Vice President between 2003 and January 2008 when Arthur Moody Awori was appointed to the position by retired President Mwai Kibaki. Uncle Moody as he is often referred to as, is one of the most prominent politicians in the country and easily among the wealthiest individuals in the country.

He was first elected as a Member of Parliament representing Funyula Constituency in the then-Busia District in Western Province in 1984. He served in several positions as assistant minister in the President Daniel Arap Moi regime.

Awori quit KANU and joined the National Rainbow Coalition opposition party, and served as chairman of NARC’S top decision making organ. He was appointed Minister of Home Affairs in January 2003 and later Vice-President (while remaining in charge of Home Affairs) in September 2003, following the death of Michael Kijana Wamalwa.

He lost his Funyula parliamentary seat in the 2007 general elections.

Uncle Moody is the founding chairman of the Association for the Physically Disabled of Kenya and a member of the Chartered Institute of Secretaries.

He holds an honorary doctor of laws degree from the Southern New Hampshire University in the United States of America. He was awarded the degree in May 2004 in recognition of his many years of dedicated service to the disadvantaged in society, particularly the disabled and the poor. tute of Secretaries.

In recognition of his outstanding contribution to the nation and the society in general, the Kenyan Government decorated him with two high-level State awards – Elder of the Burning Spear (EBS) and Elder of the Golden Heart (EGH)

Uncle Moody made a comeback in President Uhuru Kenyatta’s government as the Chairman of the Youths Sports Fund at the age of 91, eliciting mixed reactions from members of the public. At the time, Uhuru defended the appointment claiming that the youth had failed to prevent the theft of public funds.

Full name, Apollo Joshua Ayienga Awori was denied entry to Makerere after a British colonial administrator withheld his admission letter. He did a stint managing the family transport business which consisted of a lorry and two buses.

He later joined the Kenya School of Government where he studied personnel management and proceeded to become a superintendent in various hospitals. He then joined Caltex Oil as one of the first African personnel directors.

The long-serving HR practitioner died in 2012.

WWW briefly worked for the Municipal Council of Nairobi after completing his training as a public health officer at Mulago Medical School in Uganda. He later resigned and decided to pursue a career in journalism and politics.

According to a report by Nation, he was among the founders of Kenya Africa Study Union which later evolved to Kenya African Union, KAU, one of the earliest independence struggle movements.

In 1946, KAU sent WWW to London to persuade Mzee Jomo Kenyatta to return to Kenya and lead the struggle for independence. Jomo had left the country 15 years earlier.

After successfully convincing Kenyatta to return to Kenya, WWW who was only 21 years old at the time was stranded in London for some time before securing an air ticket to return home.

He was one of the pioneer civil engineers in Kenya.

He joined Witwatersrand University in South Africa in 1950 before proceeding to complete his studies at Imperial College. After returning to Kenya, he led a successful career in the corporate world.

The corporate warrior nicknamed ‘King of the Boardroom’ died in 2010.

Winfred Naburi Awori followed in the footsteps of her father. She studied nutrition and institutional management in Aberdeen, Scotland.

She later worked as a senior caterer at Siriba College, University of Nairobi and Kenya Institute of Administration (KIA), among other top institutions.

Winfred was married to the late Frederick Odera, a career teacher.

She is a successful catering college owner.

Margaret Awori-Openda holds a diploma from Siriba College. She later taught home economics at the college before proceeding to the Kenya Institute of Administration (KIA) as deputy cateress.

Upon retirement, she was appointed Diocesan Administrative Secretary of the Anglican Church of Kenya, Maseno North Diocese.

She was at the center of attention in 1987 when the Katakwa Anglican Parish hit the headlines. The parish had refused to be part of the new Nambale diocese curved out of Maseno North. The matter made headlines on local dailies.

At the time, Margaret was the chair of the commission appointed by the diocesan synod to collect views on whether to curve out another diocese out of Maseno North.

According to Nation, he also led the team that carried out the first successful kidney transplant in Kenya 1984 at the Kenyatta National Hospital (KNH).

He studied medicine at Makerere before proceeding to the UK to specialise as a Fellow of the Royal College of Obstetrics and Gynaecology. He had a distinguished career as a surgeon and researcher in kidney-related ailments.

Prof Nelson Wanyama died in 1986 in a car accident. The Prof Nelson Awori Centre in Upper Hill stands in his honour.

Ernest Achibo Awori started off as teacher training at Siriba College. He later went to the US where he studied construction engineering at the Massachusetts Institute of Technology (MIT) in Boston.

After returning home, he went on to work on major construction projects both in Kenya and Uganda.

He was the first Harvard student to win the long jump, hurdle and 60-yard dash simultaneously while studying economics. He came third in the 2001 presidential elections in Uganda.

Aggrey studied political science at Harvard and holds a masters from Syracuse University. He has served as Uganda’s ambassador to the US, Belgium and European Union.

After Yoweri Museveni seized power in 1986, he dropped Aggrey as ambassador, forcing him into the opposition. They later reconciled and Aggrey was appointed minister for ICT.

Born Grace Odongo Awori, she is the 12th born in the Awori family. She studied business and finance at Hendon College of Technology in London. She began her career in Uganda. She would later become general manager at Kenya Reinsurance Corporation and deputy CEO, Consolidated Bank of Kenya.

She was Kenya’s first woman bank manager and the founder of Makini Schools, one of the best private schools in the country.

Mary studied history at Makerere University in Uganda. She then worked for Barclays Bank, becoming the first woman branch manager in Kenya. She held senior positions in international banking organisations such as Women’s World Banking.

In 1987, Mary was seconded to the African Development Bank. She retired as the vice president of WWB in New York.

Christine studied law at the University of Dar-es-Salaam and was the only woman in a class of 70.

She begun her career at the Attorney General’s chambers. She later worked for the Agricultural Finance Corporation (AFC) and the United Nations Food and Agricultural Organization (FAO).

She is married to retired judge, Andrew Hayanga.

He worked in the provincial administration prior to joining Kenya National Assurance where he later became general manager.

Naomi trained as a chef at Utalii College. She is currently a senior chef at Muthaiga Country Club and operates hostels for university girls.