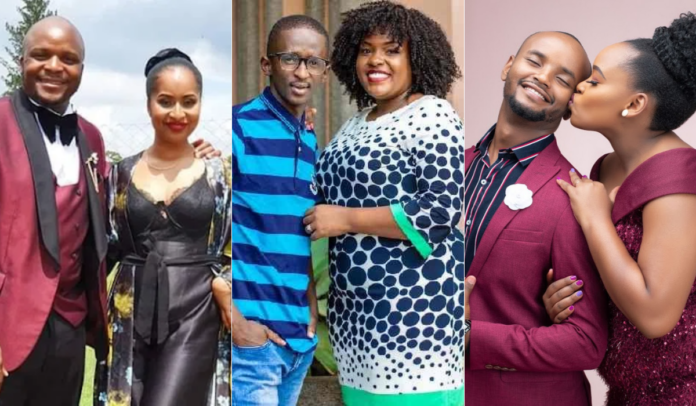 Kenyan celebrity couples have in the recent past been quick to establish businesses outside their usual day jobs. This is in a bid to try and convert their individual followers and influence into clients and to also try and empower their partners.

In this article, WoK highlights some of the businesses co-owned by popular Kenyan celebrity couples.

The renowned journalists anchor the popular ‘Nipashe Wikendi’ that airs every Saturday and Sunday on Citizen TV. The duo became the first couple to host a prime time news show in the history of Kenyan television.

Apart from their flourishing careers in the Media space, the two run a successful production company named ‘Jiffy Pictures.’ The company has since taken the media and creative space by storm since its inception and has created popular local drama series such as ‘Maria’ and ‘Zora.’

Kabi Wajesus and Milly Wajesus are popular content creators, brand influencers and Youtubers. The couple became famous through their YouTube channel which currently has over 523,000 subscribers.

Apart from being good at what they do when it comes to content creation, the duo own Bossman FPL – a clothing shop that specifically deals with men’s and boys’ fashion. Kabi is the Chief Executive Officer (CEO) while Milly is the Managing Director (MD) of the shop which is located at Soin Arcade Building along Westlands Road, Nairobi.

Simon Kabu and Sarah Kabu are travel enthusiasts who would visit various interesting places and share photos on their Facebook page. The couple started by arranging travel trips with groups of online friends. They would later spot a market opportunity and with a capital of Ksh23,000 spent in renting a room and buying a desk and a chair, Bonfire Adventures was born.

Bonfire Adventures is currently one of the largest tours and travel companies in the African continent. Simon Kabu is the Chief Executive Officer (CEO) while Sarah is the Managing Director (MD) of the company.

Timothy Njuguna popularly known as Njugush and his wife Celestine Ndinda alias Wakavinye are famous comedians, actors and YouTubers. The two who are known for creating hilarious comic skits together are a force to reckon with in the entertainment industry.

In 2021 the couple joined the fashion industry by introducing their own clothesline dubbed ‘Be Knit.’ The company produces sweaters that can be worn during all weather and they come in different designs and a wide selection of colours.

Felix Odiwuor alias Jalango is a Kenyan comedian, radio presenter and aspiring politician who is vying for the Langata constituency parliamentary seat in the August 9th 2022 general elections. The Comedian, together with his wife Amina, launched a new restaurant named ‘Wapek Delicacies.’ The multimillion restaurant is situated on the 1st floor of Queensway house, opposite the International house and is accessible via both Mama Ngina Street and Kaunda Street in Nairobi’s Central Business District (CBD).

During an exclusive interview with a local daily Media, Jalango revealed that his wife owns the restaurant but he also owns a section of it.

“This other side is actually mine. Because the bar is here and my wife is Muslim. Tulipigana sana for me to be able to convince her that we need a bar here,” he revealed.

Sonko Net Worth And Properties He Owns