Martha Karua is an advocate of the High Court and a veteran politician. The iron lady served as Gichugu Constituency Member of Parliament and was also Minister for Justice during the late President Kibaki’s regime before she resigned in April 2009. She was unveiled by Azimio la Umoja Coalition as Raila Odinga’s running mate and if the team had won, she would been the first female Deputy President in the history of Kenya.

In this article, WoK brings you the full details of the family of Martha Karua.

The senior counsel was born on 22nd September 1957 to Mzee Jackson Karua and Josephine Wanjiru Karua. She is the second child in a family of eight that comprises four girls and four boys who were all brought up in Kimunye village, Kirinyaga county in central Kenya. Both her parents are alive with her father aged 90 years old and her mother in her 80s. After news hit the country that Martha Karua was appointed as Raila Odinga’s running mate, the family came out to express their joy and confidence in their daughter leadership abilities.

The father on the other hand said that he anticipates a different and result-oriented leadership style should his daughter get to the second most powerful position in Kenya.

“I am hopeful for her governance because I have known her as someone who cannot stand corruption and whose style of politics is not about a game of insults but getting the work done. If God helps them win this, it will be a win for the entire country,” said Mzee Jackson Karua.

According to an episode on Maisha Magic ‘Stori Yangu’, the politician broke up with her husband when her children were very young. “Harusi haikuka sana” (loosely translated: The marriage did not last long). An acquittance added that she went “She went straight to maternity akaenda kwa nyumba yake. Akatoka sasa kwa bwana”. 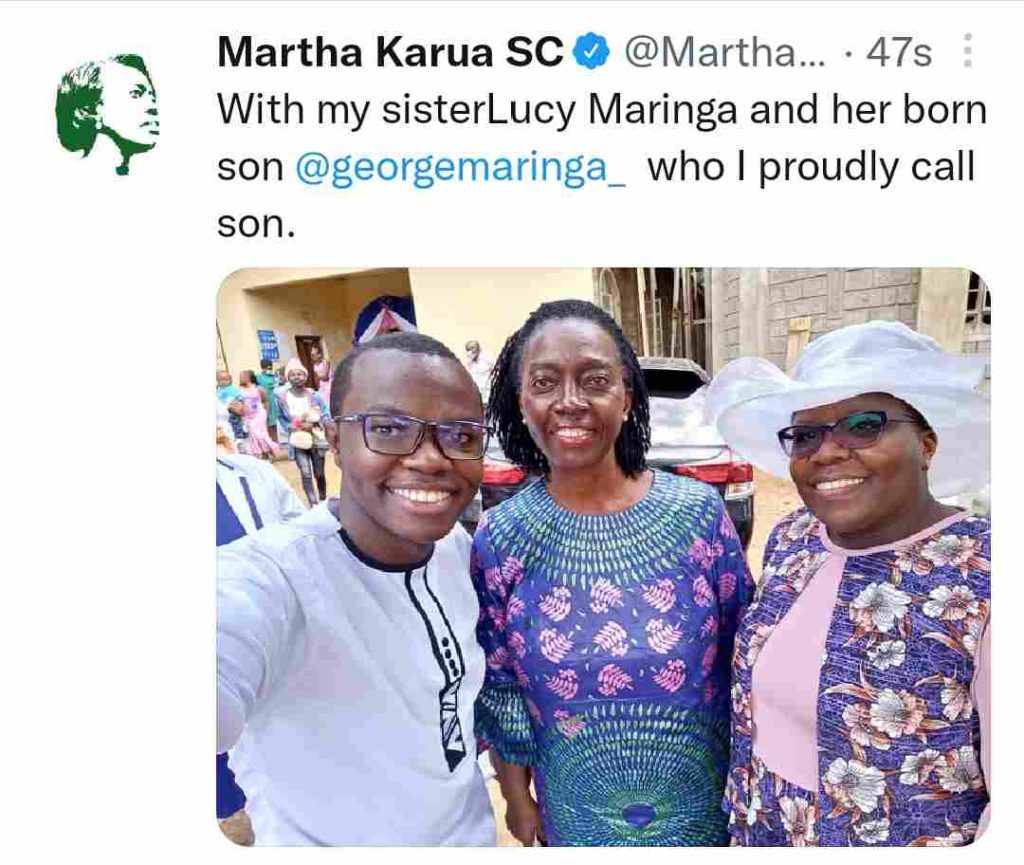 Martha Karua was in a relationship with Justice GBM Kariuki that ended acrimoniously.  She is on record saying that she was never married to him and that her marriage life is a non-issue. In an article that appeared on the Standard in 2016 titled How ending my relationship with Martha Karua got me arrested, the judge of the Court of Appeal claimed that the then Justice Martha Karua had instigated his arrest and malicious prosecution.

GBM told the court that he was arrested commando style and publicly humiliated on October 20, 2008 for “attempting to cause the death of Robert Karori by stabbing him in the stomach by (sic) a sharp object on October 18, 2008 along Kabete Road in Spring Valley”, the publication reported.

According to investigating officers, pressure was coming from the AG and Martha Karua to arrest GBM and detain him although investigations were incomplete and lacked evidence to support a murder charge.

Kenyan Celebrities Who are Married to Nigerians