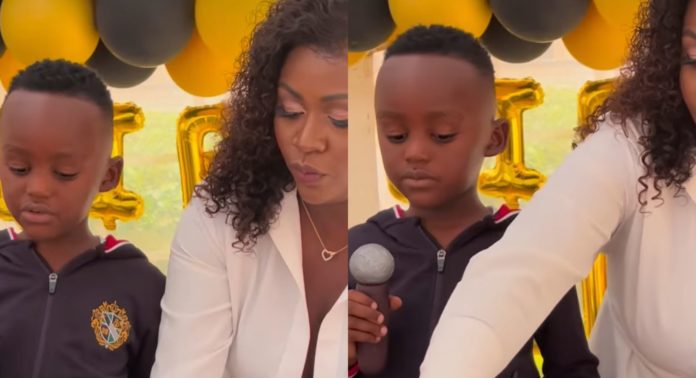 Millionaire businesswoman Mercy Maluli has gifted her son, Elvis a business worth KSh 15 million to commemorate his 4th birthday.

She also threw a lavish invite-only birthday party at her Lavington house which was attended by close friends and family.

In an interview with a local publication, Maluli said she would launch a business for her son later in the month.

“The business cost me KSh 15 million. I was to launch it on his birthday, but some things delayed. The money was from his savings

“I saved for four years since he was born… He’s a money baby. He came with so many blessings, he opened doors for me,” Maluli said.

She added that she is set to enroll him to language school.

“I want him to join music master classes in French and Japanese. I want them to learn several international languages because I know they are going to do business not just locally in the near future. Am preparing them early enough,” she said.

In September 2020, Maluli gifted his son, Brayden a house on his birthday.

Taking to Instagram, the businesswoman shared photos alongside her son to mark his 6th birthday on Satuday morning, September 25.

Maluli disclosed that she decided to gift her son a house because she promised him one and he has been praying for it.

“He has been praying for a house cause mummy promised one. God answered and he is the newest home owner in town! Anything for my boys. To brighter days ahead,” wrote Maluli.

How To Identify Fake TVs Sold In Kenyan Electronic Shops

Business Bay Square Mall: Inside Look At One Of The Largest Supermalls In East...