Geoffrey Otieno, who hails from Siaya county, is man who refused to give up on his dream of becoming an aeronautical engineer. He built a helicopter from scratch using scrap metals.

Here is his interesting story as told by WoK.

Geoffrey Otieno Ombam was born in Rabongo village, Bondo sub county in Siaya County. Growing up, he only saw helicopters during political gatherings. He developed a keen interest in choppers and by the time he was turning 7 years old, he knew he wanted to be an aeronautical engineer.

“In class five he used to tell me he will make a helicopter, he will also tell his siblings that one day he will carry them in his plane,” his mother revealed during an interview on K24.

However, after he completed his secondary education in 2011, his elderly parents George and Grace Ombam could only afford to take him to a driving school. He has since been doing construction work and operating machines although his passion is in aircrafts.

“I went to Kericho and Kisumu to ask for engineering course school fees. However, my parents had no job and could not afford the money. I didn’t bother to pursue any other institution since I wanted to do engineering only. When it comes to an aircraft I will never give up. You know in CBC, you begin with what you want to do in life at an early age. I think on my side if I was to learn during the CBC, by now I would be far better because in 8:4:4 era it was so different,” Otieno told a local media station.

With has no background in engineering, the 28 year old made use of YouTube videos to learn the basics of engineering and used recycled scrap metals to start building a chopper. He designed the various parts of the helicopter which is now the talk among residents of Bondo.

“For me, I’ve only seen a helicopter in a picture or a video. But even touching or coming close to a helicopter, I’ve never done so. Our friend here Geoffrey has a big untapped potential. Such potential should be seen and even be elevated by the county government and the national government,” a resident told K24.

The helicopter is fitted with a pilot’s flight and propeller controls and is designed to meet aerodynamics standards. It is powered by a locally assembled petrol power engine that is able to give it sufficient air lift. “It is something that you cannot build in a day or a month. Like this helicopter I started building it in 2019. I would buy the small things and keep them until the beginning of this year when I officially started building the chopper,” he explained.

For now the helicopter has not left the ground but its roaring sound and rotating wings are a motivation that his dream of flying this home-made chopper will come to pass and that he will see the door of an aeronautical engineering class someday.

“If I would be given a chance to approach an aeronautical engineer and get his help, I would be flying right now,” Otieno said. 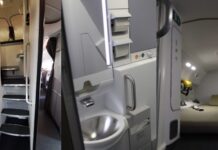 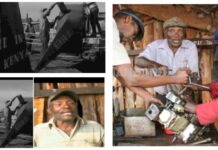 Maurice Gachamba: The Class Two Dropout Who Built Kenya’s First Aircraft That Was Airborne For About 14 Kilometers