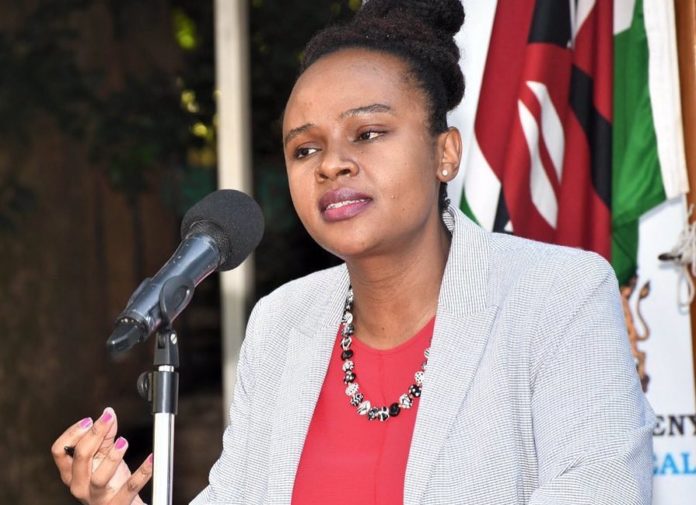 Dr. Mercy Mwangangi is the current Chief Administrative Secretary at the Ministry of health. The CAS appearance on TV to give covid-19 updates was like a breath of fresh air to many Kenyans. A lot of Kenyans were so enamoured by her beauty and intelligence that they took to social media to express their feelings.

She was student at Pangani Girls High School before proceeding to the University of Nairobi. She graduated in 2009 with a Bachelor of Medicine and Bachelor of Surgery at the age of 23. In 2015, she graduated with a Master of Health Economics and Policy from the University of Adelide, Australia. In an interview with the Daily Nation, the youthful CAS said she pursued medicine out of rebellion.

“My mother is a lawyer and I thought I am not going to be a lawyer. So what is the opposite of a lawyer? I said doctor,” she told DN.

She is the firstborn in a family of three siblings. Her mother is the Machakos Assembly Speaker Florence Mwangangi while her father is a renowned businessmen who owns Hotel Connections in Mlolongo, Machakos county.

Dr. Mercy Mwangangi is not yet married. Addressing a rally in Migori county in the company of ODM leader Raila Odinga, the CAS told the locals that she had been assured of getting a husband from the region.

“Baba (Raila Odinga) has assured me that I can get a husband from this region. Please help me get a husband,” she said amid cheers from the locals.

In a separate interview, Dr. Mwangangi stated that she was in stable relationship terming her boyfriend as “very supportive”.

Mercy also works as a joint secretary in the task force on Universal Health coverage, one of the pillars of Jubilee’s​ big four agenda.

The CAS is also a member of the African Women in Leadership Program (AWLP). This is a
program that enables women to conduct discussions on issues affecting women and to share valuable insights to help in the advancement of African Women.

Also Read: Ababu Namwamba: From Raila’s Golden Boy to Living Like a King

Role in the fight against Covid-19​

The intelligent lady is at the forefront in fighting the pandemic alongside Health CS, Mutahi
Kagwe. She was thrust into the limelight on Wednesday, 25 th March when she appeared on TV giving updates on the covid-19 cases in Kenya. There were 7 new cases raising the number to 179, 5 were found through surveillance and 2 had been quarantined. 5 of the cases were in Nairobi, one in Mombasa and one in Uasin Gishu. T

he press conference concluded with her saying 5,278 samples had been tested by that time.

During the briefing, she endeared many by her intelligence that showcased as she fluently and eloquently answered questions from journalists. It was as if she was born to it.
Since then, she has appeared severally on TV. In one instance, demonstrating the proper way to put on a mask. This was beneficial to many Kenyans who were inappropriately wearing the mask. Dr. Mwangangi would make a very good CS if given a chance, judging from her previous public appearances.

The Australian Leadership Award – as a result of demonstrating leadership skills and the
potential to influence development in her home country.

The exact salary Mercy earns is not public knowledge but her main source of income is from her job at the Ministry.

Mary Wambui Mungai Biography: From A Clerical Officer To A Runaway Billionaire