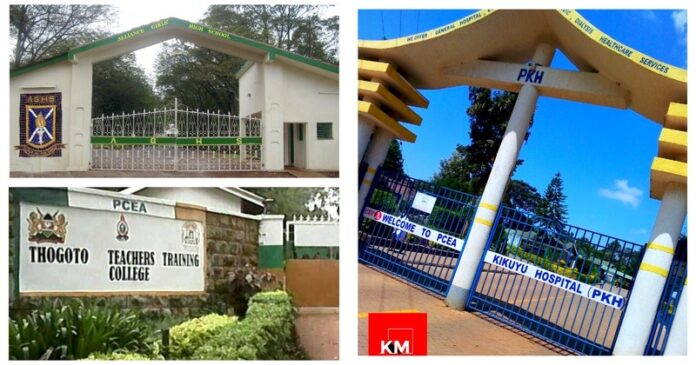 When you visit a tiny town called Thogoto, in the Kikuyu Sub-County of Kiambu County, you will agree with these wise words: Places do not make people, but people make places. This pacific place hums with marvellous memories. I treasure it because it is where I learnt my tricks of trade. I also stayed there for six years after studying English Language and Literature. I share these bragging rights. Why? Because it is the place where our founding father, Mzee Jomo Kenyatta, attended school in his fledgling age.

Indeed, Thogoto is an educational centre with two universities, one teacher-training college, five secondary schools and five primary schools. This is where we find the two crème de la crème schools — Alliance High School and Alliance Girls’ High School. There is also the Kikuyu Mission Hospital — one of the best eye hospitals in Kenya. This is attributed to the Church of Scotland that dates back to 1897, now the Presbyterian Church of East Africa (PCEA). The church, hospital, schools and cool climate, made this place to be akin to Scotland.

In retrospect, in 1891, East Africa Scottish Mission (EASM), commissioned six missionaries to Kenya. The first mission was in Kibwezi. Only Thomas Watson survived, other missionaries died due to callous climatic conditions. Watson battled smallpox. He moved from Kibwezi to Ft. Smith in Dagoretti where he was joined by John Patterson. They edged to Thogoto, purchased 30 acres of lush land, and established a camp.

In actual sense, the railway line reached Kikuyu in 1899. It is this year that Thomas Watson travelled to Mombasa by train to greet and meet the love of his life, Minnie Cumming. They tied the knot at the Church Missionary Society (CMS) station, in Freetown near Mombasa. As a young couple, they decided to get back to Kikuyu. The missionaries met many miseries and misfortunes. From 1894 to 1896, there was a serious locust invasion and drought in 1897. Rinderpests wiped out cattle. Many people succumbed to death due to ferocious flames of famine. In 1900, Watson and Minnie, established a camp to take care of smallpox victims and those stricken by severe starvation. They started a day school for children from the camp, and an evening school for young men who worked at the mission. A fire kindled in the centre of the village, and around there, gathered the villagers, to join in the hymns, and to hear the old, old story.

Unfortunately, on December 4, 1900, Thomas Watson had a date with death. He succumbed to cruel claws of pneumonia. This sowed sorrow in the heart of Minnie; for death came just two weeks before they celebrated their anniversary. The good news is that Minnie Watson chose to carry on. 1n 1901, East Africa Scottish Mission (EASM), transferred the mission mandate to the Church of Scotland. Dr. D. Clement Ruffelle, a Scott from Blantyre Mission in Nyasaland was brought on board to spearhead the mission. They formed a formidable force with Minnie Watson. The mission dream team and the colonial government combined efforts and started the first boys’ boarding school, which had only seven striplings. By 1920, the school population had ballooned to 3,000. Girls joined boys as day scholars until girls’ boarding was born despite opposition based on retrogressive aspects of culture.

Serendipitously, on March 1, 1926, Alliance of the Protestant Churches started the Alliance High School. This deep well of knowledge sprung from four churches — Methodist Church of Kenya (MCK), Africa Inland Church (AIC), Church of the Province of Kenya (CPK) now known as the Anglican Church of Kenya (ACK), Church of Scotland Mission, which later morphed to Presbyterian Church of East Africa (PCEA). Alliance High School churned out men of substance like Ngugi wa Thiong’o, Charles Njonjo, Anyang’ Nyong’o, et cetera. Now the question was, where would these men of means get winsome wives of their calibre? That led to the provenance of a glorious girls’ school in 1948: African Girls’ High School now known as Alliance Girls’ High School. It has churned out women of great heft such as Margaret Ogola, Micere Githae Mugo, Sally Kosgei, Charity Ngilu, et cetera.

Lastly, Minnie Watson held the cornerstone of the PCEA Church of the Torch at its inception in 1929. Then returned to her homeland in 1931. She was promoted to glory in 1949 after fighting a good fight of faith. Meanwhile, the PCEA church has been able to grow, glow and given birth to more parishes all over East Africa, more so around Mount Kenya Region. This church has promoted education in Kenya by starting and sponsoring many schools, colleges and a university — the Presbyterian University of East Africa (PUEA).

Role Of Churches In Growth And Development Of Our Schools

From Hawking To Giant Retailer: The Resilient Story Of Khetias Supermarket