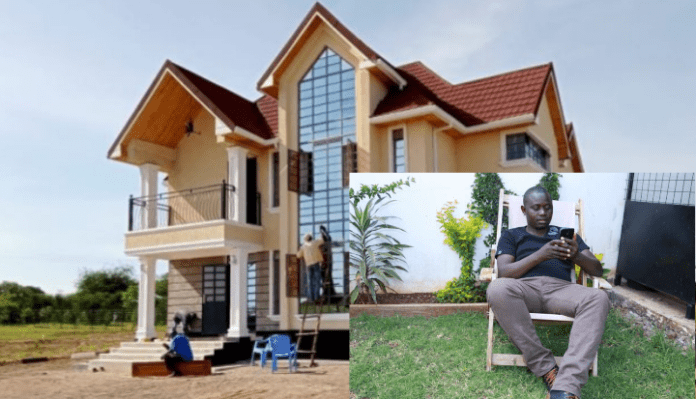 After winning the Ksh 230 million Sportpesa jackpot, Gordon Ogada hit headlines after he claimed he was broke in just six months. But it seems it was just a clever move to guarantee him peace as he was making great moves away from the media

In 2018, Gordon Paul Ogada correctly predicted the outcomes of 17 football matches on the Sportpesa jackpot and ended up an instant multi-millionaire. The then 30 year old won a whooping Ksh 230,742,881.

When unveiling him, the betting firm chauffered him in a limousine from Kibera to the famous Carnivore grounds in Nairobi. The matter brought everything to a standstill as bodaboda riders escorted him.

Keen on getting the best photographs of the event, members of the media struggled as they lifted their cameras high in the crowd. Ogada was the new tycoon in town who landed a fortune with only a ksh 100 gamble.

However, in just six months, Ogada alleged he was broke, a matter that was simply hard for anyone, including his friends to comprehend. More questions arose as to how the man spent the great windfall even as he said he was hanging on hope to win another jackpot.

According to the father of 2, whose first investment was a bodaboda, he had spent the money in long-term investments and purchased cars. Additionally, Ogada channeled some cash towards building his parents a house in Migori County.

“There is a misconception that I am moneyed ever since I won more than Sh200 million. Truth is that I don’t have the money. I know it’s hard to believe,” he told the Nairobian in 2018.

Ogada intimated that he was ashamed of himself, and that were he to win another jackpot, he would be more responsible.

But four years later, it appears what Ogada had told the media was a smart move to get off from the limelight. As Kenyans were spending time discussing Ogada’s financial miscalculations, the Migori man was secretly making moves.

Read Also: The Top 10 Oil Marketers With The Biggest Share Of The Kenyan Market

As revealed by sokodirectory Ogada had resolved to sponsoring at least 56 students from disadvantaged backgrounds in attaining their education dream. It is for this reason that the Migori County Government recognized him in 2019.

The former Kibera resident also gave back to the community by sinking 14 boreholes in Nyatike, a move that relieved residents of access to clean water.

Ogada’s dream house set up in Migori is in the final stages of completion. The house, born of an architect’s plan exceptionally stands out with its magnificent design.

It is a storey house, with a maroon tiled roof that has some portions shaped into dormers. The front of the house shines with the extensive glasses that are fitted beside the entrance which has been designed into a porch, with a balcony on its top.

Maryanne Kitany: The Billionaire Ex-Wife Of Mithika Linturi And Her Troubled Marriage To The...

Postbank Leadership, Losses Of Kes3 Million Per Day And Way Out