Young Kenyans have been taking advantage of the online space to create a livelihood for themselves. Moya David-who is in his 20s-commands over 3 million followers on TikTok making him the most followed Kenyan on the social media platform in Kenya.

In this article, WoK takes a look at Moya City Spa – the newly launched multimillion Spa owned by Moya David.

Moya David became famous through making TikTok videos where he surprises strangers with gifts while dancing for them. The videos went viral garnering him over 3.4 million followers and 35 million likes on tiktok. He also has over 177,000 followers on instagram and 110,000 subscribers on YouTube.

He established Moya Surprises Limited – a company where people hire him to surprise their loved ones on special occasions such as weddings, birthdays or anniversaries. 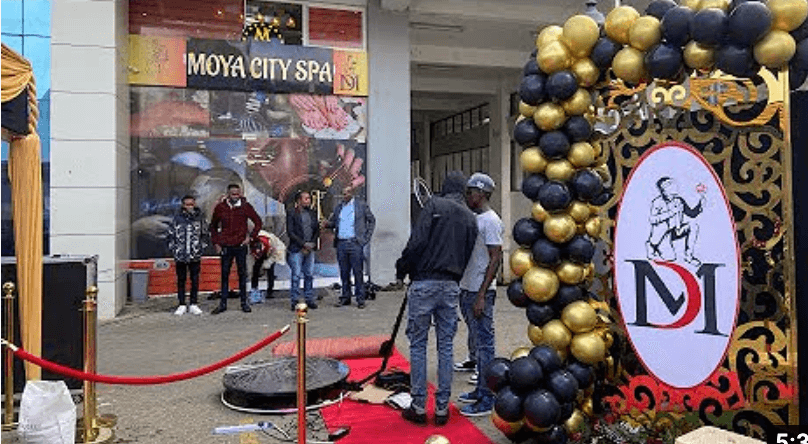 Moya City Spa is a unique beauty parlor, barber shop and spa that was launched on 30th July 2022 in a colorful event that was graced by popular and influential individuals such as Bonfire adventures owners Simon and Sarah Kabu. Located in Kilimani along Ngong road, the facility offers various services such as manicure, pedicure, massage, dreadlocks, barber services and hairdressing among many others. Speaking during an exclusive interview with Mungai Eve, the tiktoker revealed that he had always had a plan to own a physical business in his twenties as part of investing in his future.

“It’s something I have been planning for long. When you get the chance to be in the limelight people do different things with their money. But for me I thought the way I’ve struggled in life, the little money I get I don’t want to waste it, I chose to invest instead. So this Spa is also a part of my investments since I’m a businessman”, he explained.

He went on to reveal that he funded the business alone since he wanted to experience the feeling of owning something.

“I didn’t partner with anyone and that’s why it’s named Moya City Spa. I wanted to experience the feeling of having something I own. I had always had a goal of achieving several things before 25 years old and this was one of them. I haven’t done the whole calculations but I know this place has cost me several millions. All this money has come from my savings before and after the fame,” he revealed.

Joab Okeya: From Hawking Kunde In Muthurwa To Co-Owning The Sh30 Million Restaurant

Kimani Ichung’wa Biography: The Butcher Who Turned Member Of Parliament