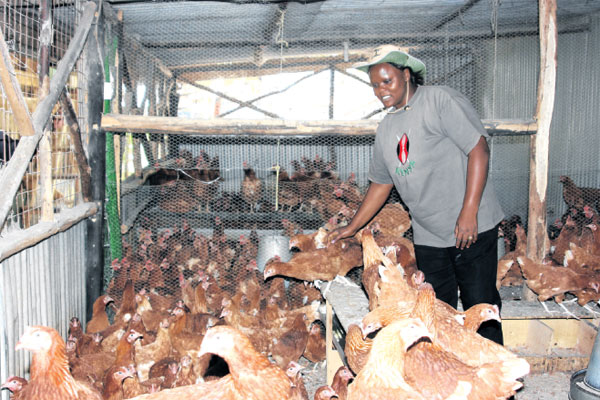 Beatrice Kirui got a job working as a sales manager for a seed company in Uasin Gishu. This was her only interaction with Agriculture as she had no background in the field. Nonetheless when her interest was spurred, she invested in poultry and dairy farming and managed to turn it into a success story.

The businesswoman had a quarter an acre in Nakuru’s Kiamunyi area. She was part of a merry-go-round group in the area where she received Sh30,000 when it was her turn. It was this money that she used to set up a structure and bought 100 chicks which grew to 3000.

The farm had 3,000 chicks, thirty rabbits, two goats and three cows. The cows, two friesians and one Ayrshire, produced about 50 litres of milk. She chose local breeds rather than hybrids since she had no experience. According to her, there was no need to invest a lot on something she had no experience with.  She is also able to transform the cow dung  into biogas fuel for both cooking and lighting. She started rabbit farming thanks to her son who wanted rabbits since his friends had them. She sells the rabbits depending on the size with the least at the time going for Ksh500.

The chickens are put in two separate coops holds 1500 apiece and the rabbits are also put in two stalls carrying 15 each. The animal structures are built using iron sheets and wood. The compound also hosts a servants quarters and a kitchen for workers. She has four workers who handle the day to day running of the farm.

Since she works far from the farm, she visits on the weekend and keeps track of everything through the phone

From the chickens, she is able to get 70 to 80 trays, which she sells to traders around the area at a wholesale price.

One of the challenges she has encountered is low quality feeds. At one point, she bought feeds of poor quality from a dealer which made the egg shells weak and the yolks white. This led to a lot of losses.

Musa Ambuchi Biography: The Police Constable With A PhD