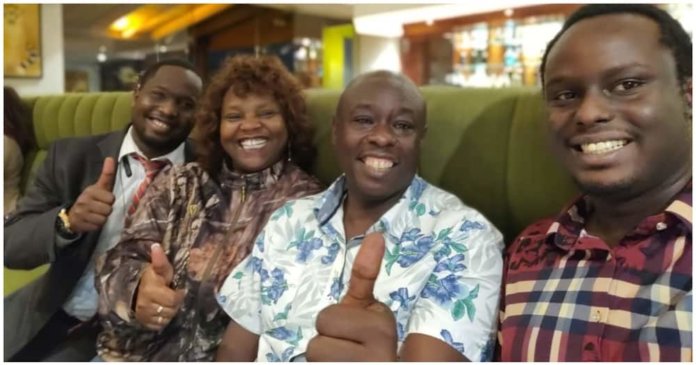 United Democratic Alliance (UDA) deputy presidential candidate Rigathi Gachagua is known for his outspoken and stern persona. During Tuesday 19th July Deputy Presidential debate, Rigathi for the first time talked about his family in public, terming it as the basic unit of the society.

Gachagua has been married to Pastor Dorcas Wanjiku Rigathi for 35 years, with whom they are blessed with two sons. The firstborn son, Kelvin Gachagua, is a software engineer, while the second born son is called Dr. Keith Ikinu, a medical doctor who also helps out with the running of the family businesses.

Interestingly, Dr. Keith, Gachagua’s second born son, was among the top students during the 2010 KCSE national examinations. He is an alumnus of the Alliance Boys High School.

According to the order of merit for the 2010 KCSE examinations, Keith scored a mean grade of A plain of 86.92 points and was ranked 17th nationally.

After his High School education, the 29-year-old joined the University of Nairobi (UoN) to pursue a Bachelor of Medicine and Bachelor of Surgery. He graduated in December 2019.

After 30 years, I went back to the University at the graduation square this morning to witness the graduation of my last born son, Keith Ikinu Rigathi, who was awarded Bachelor of Medicine and Bachelor of Surgery. My wife and I were overwhelmed with excitement and indeed we are very proud parents.

“We thank God for his goodness in seeing Keith through a very difficult course that took him six years.”

“Having seen my last child through school, I will consider going back for a Master’s Degree in the same university sometime next year. I am a very proud father and I salute Doctor Ikinu Rigathi for the honour he has bestowed on his parents. As he starts working as a Doctor, I have reminded him that the profession is a calling and I am very happy he has joined me in service to mankind,” the post read in part.

The nominated Deputy President candidate for UDA is recorded lauding his son Keith for his passion for his profession while working at Mbagathi District Hospital.

Currently, Ikinu is in charge of the family business. His father had to say this about his two songs:

“I’m Rigathi, family is the basic unit of society, and the nation, strong families make strong nations, I’m the head of a family and it’s my pleasure and privilege to introduce my wife Dorcas, and my firstborn son Kelvin Gachagua a software engineer and my second born son, Keith Ikinu Rigathi, medical doctor, who helps me to run the family business,” he said.