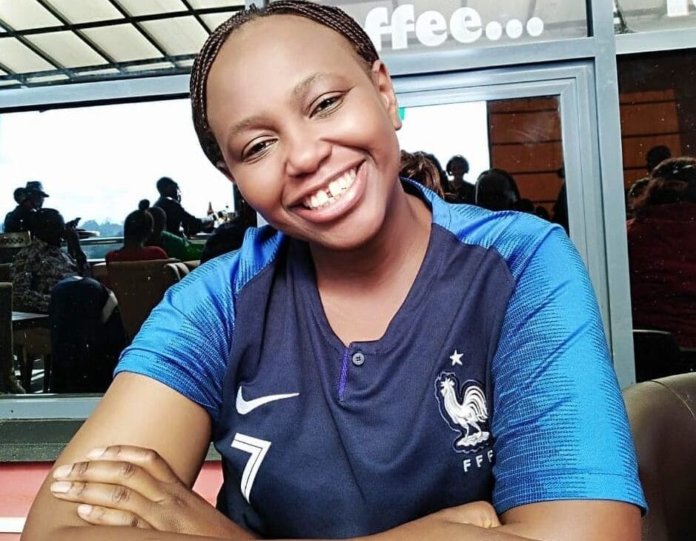 Turn on any TV or radio station and you are likely to see a woman reporting the sports news. Women have finally gained national acceptance and recognition for their role as sports journalists.

A lot of credit goes to the women before them, those who charted a path where there was none and opened up a whole new sector of sports journalism.

For both male and female presenters, Carol Radull is arguably the best in the business. An ardent Arsenal fan, she is widely considered to be one of the most talented moderators in sports media today. With a career spanning over twenty years, she has become a household name in Kenya, hosting shows like The Score on radio and now The Game Plan on NTV.

Radull spoke to WoK about her journey in sports media and how she pioneered Kenyan sports journalism as we know it today. She also detailed the importance of exuding deep confidence and passion through what she does, her plans for the future and her dissatisfaction with the Kenyan sports industry.

I grew up in Botswana. Our school had all games, so I grew up playing all games from athletics, netball, football, all that. I knew all the games and the rules as well.

As a fan, it wasn’t until about 25 years ago when I started watching live football and really feeding my interest on the game. Football and rugby were my favorite games back in school.

Do you still play?

Yes I do, though not competitively. I do badminton and football and swimming every now and then.

You are one of if not the leading sports journalists in Kenya. How did you start your career?

I tell people that I am not a sports journalist, I am a sports fan. At the beginning I used to watch major championships like EPL and Champions league, but later I began watching league games to familiarize myself with the wider football fraternity.

When I finished school I went to Alliance Francaise and the French are very good at convincing people to support their own. That is when I started supporting Arsenal because I was a fan of France. I gained an interest in the French players, most of whom played in Arsenal, the likes of Thierry Henry, etc.

I remember in 2006 we were looking to do a sports show in Radio Africa. At the time, sports was EPL. The person initially commissioned to host the show was Maina Kageni, but he was not available on all weekends to do the show. Noticing my love for sports, he asked me to do it for about a month Jimmy Gathu. So the show started off with me, Maina and another guy called Muniu. Due to his busy schedule, Maina eventually left the show, leaving me and Muniu’s brother Kieni to do the show. Later on we would bring on board others to make a team that did The Score.

At this point in your career did you have a mentor?

I did not have a mentor because no one else was doing it. Maina and I coined how sports shows are done today. There was nothing like it at the time. We were the pioneers in this field.

Interestingly, what most people do not know is that from 2006 until last year, my main revenue earner had nothing to do with sports. I was a news editor, news, digital editor, etc. The only time I was engaged almost full time in sports was in 2008 as sports controller in Radio Jambo which started off mainly as a sports radio station. Later we tried our hand at Bamba Sports, a TV station under Radio Africa then I  went back to being a program controller for a station that had nothing to do with sports. Everything I did on sports was during the weekends and evenings.

Later in 2009 is when SuperSport approached me to do the Punchline show for the Premiere League. After that I started giving attention to the Kenyan Premiere League because I felt there wasn’t much attention being given to it at the time.

As a pioneer in this field, what challenges have you faced on your way up?

Getting people to take me seriously at the beginning of my career. People used to judge me as a woman but then later they realized that I know my stuff and respected me and what I do.

Another challenge was when I tried to get people to watch Kenyan football. People criticized local football calling it disorganized and all that. Of course some of the critics are right about some things being wrong, but I insist that we need to grow our own to become what we would want it to be. That is how we begin to change the game. There is so much impunity because no one is holding the people in office accountable.

Another major challenge I would say is dealing with management of sports in the country. Currently what is happening with Kenyan football, players and teams are struggling. The managers, government and federations all have the wrong people calling the shots. I wish to see players getting paid, live comfortably and see football thrive in the country.

What in your opinion can be done to make things better?

First we need officials that care about sports from the top. Issues of sharing facilities and teams not having time to practice is a nightmare. We need leaders that will transform the sports industry right from the government to the federation.

I keep telling people the story of how I went to Bundesliga stadiums and I saw how many people employed from the grounds men, Lawyers, Doctors, merchandisers, cooks, nutritionists, etc. The whole ecosystem is empowered, creating employment opportunities.

Now imagine if we had this kind of attention on our players. It would transform the football industry and even how players play and train. If we do it properly even local fans will be motivated to go watch the local matches.

Most people know you from your stint in radio. You are now on TV. How has the transition been for you?

Is there a particular moment you would describe as the peak of your career so far?

I have had several. First is going to the World Cup 2006 in Germany and 2010 in South Africa. Another is interviewing superstars like Julius Yego, Rio Ferdinand, Eliud Kipchoge, Ronaldinho, Tegla Lorupe, Victor Wanayama and Thierry Henry. I have also had the opportunity to work with the latter as the Guiness brand ambassador in Kenya.

Who are your favorite local and international football players?

My favorite international player is definitely Thierry Henry and I am stoked to have met and worked with him. In Kenya there are so many athletes in different sports. It is hard to choose just one.

What’s next for you?

I would say I want to get more into the digital space and grow my media space into a bigger media house. I want to exploit this space to the fullest and grow my brand into something that is bigger than me as a person.

I also have different passions in life. I want to do some farming, I also want to put up a football pitch for kids to play. If I get a partner I will see how to upgrade it. I have actually gotten some interest when I put it up on Facebook a few weeks ago. I hope to do this in the near future.

What is your advice to young sports journalists who want to reach your level of greatness?

One, know your stuff, two, be passionate and three, be consistent. The reason I say this is because there are not many mainstream jobs these days. Today it is easy to produce your own TV show through platforms like YouTube. You can employ yourself through showcasing your craft on these media. With consistency you will eventually get a good following to attract corporate sponsorships.