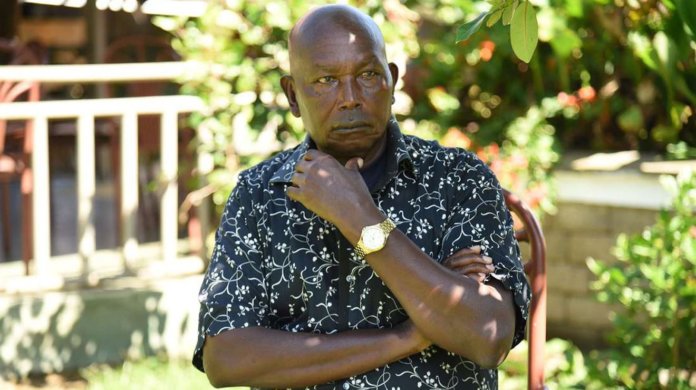 Lee Njiru was the late President Daniel Moi’s top secrets, having remained close to him until his death on a Tuesday morning. He was one of Moi’s favourite and trusted aides. Even when on a trip outside the country, it was usual for Moi to call him aside for a chat.

Severally they would burst into hearty laughter, signifying their close friendship. Njiru actually describes Moi as a “father and mentor” to him.

In this article, WoK compiles Njiru’s experience, his close acquaintance with the late President Moi, and his surprise support Moi’s son biggest rival.

For his secondary school education, Lee attended the Kangaru School, where he completed his O levels in 1968. He later joined the Kenya Institute of Mass Communication from where he graduated with a Diploma in Journalism and Print Media.

By the time he joined the PPU, Jomo Kenyatta’s health had started to deteriorate and so then Vice-President Moi attended most functions and travelled for international conferences on his behalf. When President Kenyatta died in 1978, Mr Njiru remained in the PPU as Moi assumed the presidency. Two years later, he went on a study tour in the United Kingdom.

Even after Moi’s retirement in 2002, Njiru continued to take care of his image. He even moved to Nakuru so that he could continue working for Moi, who had moved to his Kabarak home. The media continued to rely on him for information pertaining to the former President and his family.

For a long while, he was the go-to person when Moi’s eldest son, Jonathan, passed on.

Njiru’s family is one of the wealthiest and most successful in Runyenjes, Embu East. Among the known assets include Kenwide Media Services, a real estate in Nakuru and printing presses in Nairobi.

He is also the owner of the Geranium Resort in Ngata, on the outskirts of Nakuru town, where he also resides.

Launch of his memoir

In late July 2022, Lee Njiru launched his book, a memoir titled “The Presidents Pressman”. At the launch, he revealed that he was inspired by the need to demystify the statehouse. In the book, Njiru lifts the lead on the behind-the-scenes dealings at the statehouse.

The book, which according to Njiru took two years to compile, aims at revealing what really happens there besides the glamour and power that beholds the statehouse.

“I did not think I had the capacity to write a book, but after some of my friends implored me to do so. I decided to tell my story so that citizens are not lied to by the magnanimity of what they think is statehouse. Behind the scenes are bigotry, ethnicity, backstabbing and pain,” Njiru said at the launch.

Njiru also said he wrote the book to make young people understand the need for tenacity. To focus on the objective tenaciously and also avoid tribalism but rather become a citizen of the world.

He also urged other civil servants acting in that capacity to document their experiences. “I call upon others who are here and the heads of the president’s press service to also consider writing a book. Kanze Dena should write a book and lift a lead on what she has witnessed during president Uhuru’s stay at the statehouse. The citizens need this information,” he said.

For a long time, conspiracy theorists had been comparing photos of Moi and Njiru, claiming that the press secretary was Moi’s son.

However, appearing on Citizen TV’s JKLive, Njiru rubbished the theories saying he looked more like Mzee Moi’s younger brother and not a son.

“I was born in 1949 in Embu, Mzee Moi had not been to Embu during that time. I look like a younger brother not like a son…” He explained.

Njiru also said that he was willing to subject himself to a DNA test if needed.

Speaking to Citizen Digital on Thursday in Ngata, Njiru said he shifted allegiance from incumbent MP Raymond Moi, the late President Moi’s son, due to what he termed as the UDA political wave sweeping through Nakuru County.

Njiru, who many perceived to be a loyalist to the Moi family due to his long working relationship with the late retired Head of State, were surprised by his decision.

Raymond Moi will be facing off with two other candidates as he seeks to retain his seat; Paul Chebor of UDA and CCM’s Luca Kigen.

Raymond is the last of the Moi sons who is seeking to clinch an elective seat in the 2022 General election after his brother Gideon Moi was beaten by William Cheptumo in the Baringo Senatorial seat.

IEBC had suspended Parliamentary elections for Rongai Constituency in Nakuru County after a mix-up in the ballot papers.