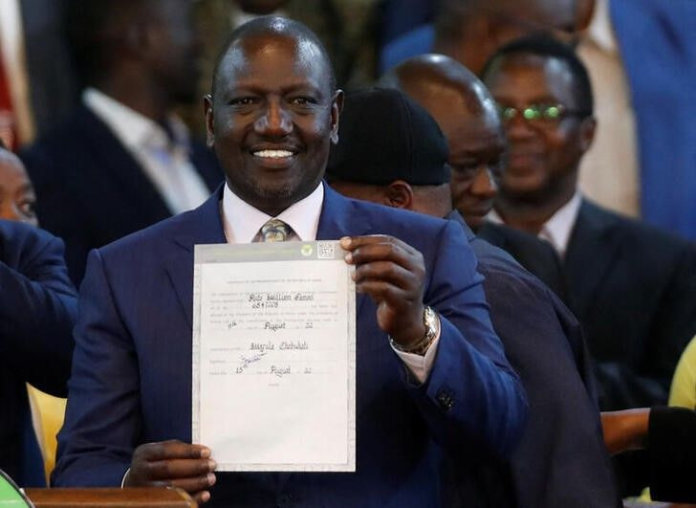 Listed below are some of the congratulatory and goodwill messages sent by various world leaders.

Ugandan President Yoweri Museveni revealed that he had contacted Ruto via phone call and congratulated him on his win.

“Further to my telephone call last night upon your victory, I wish to reassure you of Uganda’s commitment to continue partnering with Kenya in advancing regional and continental agenda through the East African Community, African Union and other multilateral platforms,” said President Museveni in a statement, adding that he will continue to work towards the enrichment of existing ties between Kenya and Uganda and strengthen regional cooperation.

“I offer my warm congratulations to the President-elect of the Republic of Kenya. A prosperous and united Kenya is an important prerequisite for and contributor to a prosperous and peaceful continent. We look forward to working with you in pursuit of #TheAfricaWeWant.”

In a statement issued on Thursday August 18, the Russian Embassy in Kenya expressed optimism on behalf of Russia that they were looking forward to strengthening ties between the two countries as well as deepening cooperation.

“The Embassy of the Russia Federation in the Republic of Kenya has the honor to congratulate H.E. Dr. William Samoei Ruto upon the announcement of his being elected President of Kenya,” the statement read in part.

Mnangagwa lauded Ruto for his victory with the message,

“Congratulations to @WilliamsRuto on his election as the next President of Kenya. I have no doubt he will serve his country, his people and our continent with distinction.”

Rwandan President Kagame joins the list of other African leaders who have congratulated HE William Ruto on his victory.

“On behalf of the Government and People of Rwanda, I congratulate our Brothers and Sisters, the People of Kenya, for conducting peaceful elections on 9 August, 2022. I also congratulate H.E. Dr. William Samoei Ruto, the President-Elect.”

Burundi’s Ndayishimiye commended Kenya for successful elections saying, “My heartfelt congratulations to the President-elect and the people of Kenya for holding free, fair and peaceful elections. We urge all the parties to preserve peace, and disputes are resolved by existing competent legal mechanisms.”

Tanzanian President Samia Suluhu also sent her congratulatory message to Kenyans. Through a message posted on her verified Twitter account, Suluhu said, “I congratulate the people of Kenya on their peaceful general election and the subsequent announcement of Dr. William Ruto as President-elect. We look forward to continuing working together with our brothers and sisters in Kenya to strengthen our historically close ties. Tuko Pamoja.”

Malawi President Lazarus Chakwera also lauded Ruto on his success. He said, “Congratulations @WilliamsRuto of #Kenya for your election victory. #Malawi looks forward to working with you in strengthening bilateral ties & cooperation.”

On its part, the US Embassy in Nairobi described Ruto’s win as a milestone, urging anyone with dissatisfaction to challenge the outcome through the legal system.

In a statement, the US Embassy in Nairobi said, “Under the leadership of chairman Wafula Chebukati, the IEBC declared William Ruto as the presidential election winner. This is an important milestone in the electoral process. Going forward, we urge all parties to work together to peacefully resolve any remaining concerns through existing dispute resolution mechanisms.”

President Buhari wished Ruto a successful tenure in office, pledging collaboration with Kenya on issues of cooperation. His statement read in part, “I congratulate the President-elect of Kenya, William Ruto, on his victory in the August 9, 2022, general elections. I wish him a successful inauguration and tenure in office while looking forward to more fruitful and robust engagements between Nigeria and Kenya.”