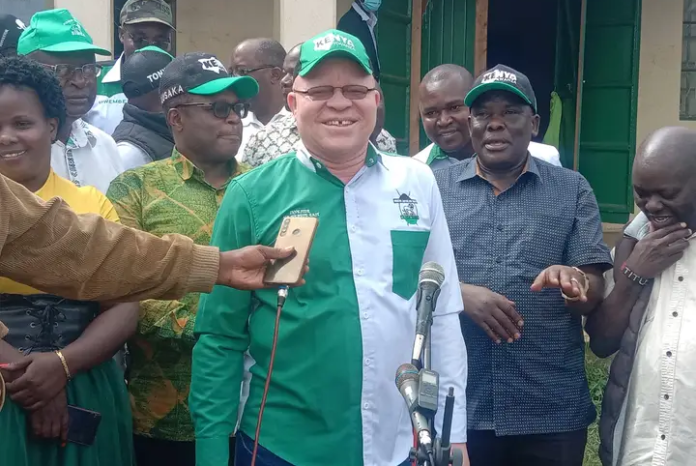 In the 2022 polls, Martin Wanyonyi Pepela became the first person with albinism to clinch an MP seat under universal suffrage. Popularly known as ‘Investor’ among Bungoma locals, Wanyonyi trounced fellow aspirants in Webuye East with a landslide after he garnered 12864 votes.

Wanyonyi was elected on the Ford-Kenya party which mounted a heavy political juggernaut in Bungoma County that floored veterans like Wafula Wamunyinyi (Kanduyi) and Dr. Eseli Simiyu (Tongaren).

Growing up, life wasn’t a smooth ride for Wanyonyi who had to face certain prejudices considering his condition. In primary school, the Webuye East MP elect details that neither teachers nor classmates understood him. He recalls that he suffered poor eyesight and had problems with concentrating in class.

“While in Lukusi Primary School, I was unable to concentrate, I was unable to take my studies because I could not be able to read books due to poor eyesight. My colleagues were unable to understand whom I was. In fact, the worst was even teachers themselves could not really understand me and address my challenges,” he says.

Fighting For The Rights of People With Albinism

Despite the challenges, Wanyonyi knew that the only way he could get a panacea was through venturing into politics. A young Wanyonyi always looked up to Siaya Governor-elect James Orengo due to his role in fighting against the perceived dictatorial regime of President Moi.

In 2008, Wanyonyi worked with Eugene Wamalwa in imploring parliament to allocate funds that would go into delivery of services to people with albinism. He has also served as the chairperson for people living with albinism in the larger Western Kenya region through which he helped in procuring of sunscreen lotions to the group.

The 37 year old was nominated as a Member of County Assembly (MCA) in Bungoma representing persons with disability in 2013. In 2017, he chose to seek the people’s mandate as an MCA for Ndivisi ward. Despite various parties denying him the ticket, he went on to win the elections as an independent candidate.

Towards 2022, Wanyonyi made his intentions of succeeding veteran politician Alfred Sambu clear. It was reported that the latter was not going to defend his seat due to old age and health concerns.

As a politician who has mastered the art of wooing voters, he was vocal in castigating certain constituency officials who had allegedly taken advantage of Mr. Sambu’s ill health to embezzle funds. Wanyonyi also criticized the national government over reports of the planned evacuation of Webuye residents from Chetambe Forest. Later on, the government went slow on the move.

But joining the Ford-Kenya party was yet again another political masterstroke as it is undoubtedly the most popular political outfit in Bungoma County. Wanyonyi went on to win the seat as he made history to become the pioneer person with albinism to get into the August house through elections.

“I am humbled that whatever will be said in these elections in the days and months to come, one thing that will remain a fact is that these elections have produced the first person with albinism to be elected through universal suffrage in the republic of Kenya,” he told NTV.

What Club Deejays Earn In Kenya Per Show