As we approach the next general elections, candidates eyeing various political seats are employing every tactic to woo voters. One campaign truck associated with DP Ruto’s United Democratic Alliance (UDA) caught the eye of Kenyans and became the talk on social media platforms. Unfortunately the fuel guzzler broke down-due to the modifications done in Kenya.

In this article, WoK brings you the story of Patrick Nderitu – the man who donated the popular campaign truck.

Owner of Pimp My Ride

Patrick Nderitu is the Managing Director of Pimp My Ride and director of Landmark Property Services. He is a renowned entrepreneur who owns a car wash and a garage under the brand name ‘Pimp My Ride.’ Speaking to the Standard, the businessman revealed that he imported the vehicle from Dubai.

“The truck was imported from Dubai and the other branding was done in Kenya, among other final touches. The whole preparation for the vehicle took a year. That was when it was completed and everyone started talking about it. We had to plan it in advance so that the end result can be of high quality,” he explained.

Features and cost of the truck

The interior design of the truck is magnificent just as the outside, with a red carpet on the floor and a podium that helps Ruto to stand on when addressing Kenyans in rallies across the country. It has two sunroofs, a VIP protection area, a fridge and charging ports. The front doors of the vehicle are automated and hinged at the rear enabling it to open up like a Lamborghini. The truck is a four wheel drive with huge tires enabling it to maneuver in off roads and can go up to 200 kilometers per hour while on a highway. He would then reveal the price and the motivation behind the truck during the exclusive interview.

“The value of the truck is between Ksh 80 million and Ksh 100 million. I donated the vehicle to the Deputy President unconditionally because I felt he needed it in the final stretch of his campaigns,” he revealed. 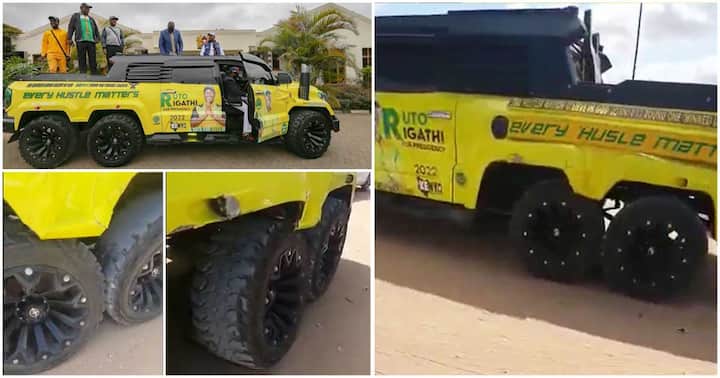 The truck was gifted to the Deputy President William Ruto on 16th July 2022 and that afternoon he used it in his campaigns at Undugu grounds in Langata. He would then take to his social media account to laud the efforts of Nderitu.

“Indeed every hustle matters. Pimp My Ride: Creativity at its best. Thank you for your contribution to the Hustler Nation Campaign,” he wrote on his twitter handle.

In July 2019, Patrick Nderitu was caught on a fierce battle with the then Nairobi governor Mike Mbuvi Sonko. The battle involved the demolition of his property located at the junction of Muindi Mbingu Street and Kenyatta Avenue. Sonko claimed that the building was constructed illegally while on the other hand Nderitu claimed that he was possessing the land lawfully under a lease agreement. A few months prior, the county government had demolished a car wash owned by the businessman.

In another debacle, the businessman claimed to own a one and half acre piece of land where a Buru Buru church stood. According to Nderitu, the Nairobi county was trying to annex his property. He went on to start that he had all the documentation to support his ownership.

Chinese Contractor Received KSh 4.3 Billion For Doing Nothing At JKIA

Tom Gitogo: Profile Of The New Managing Director And CEO of Britam Holdings