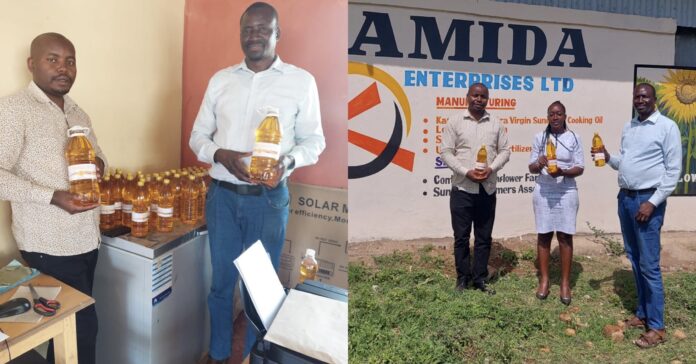 When Paul Ogolla completed his university studies, he chose to pursue farming instead of seeking formal employment.

He went ahead to join a friend in a non-profit organization where he won a scholarship for a Master’s degree in the US.

After completion of his studies, Ogolla joined a friend at Seeds of Peace Africa, a non-profit organization in 2002.

Later on, he was lucky to get a scholarship with Ford Foundation to further his studies in the United States in 2006.

After his studies, Ogolla returned home and set up an organization seeking to establish modern toilets in Kenyan schools.

In 2017, Ogolla was pushed to venture into sunflower production in a bid to sustain his organization, and launched an oil production company dubbed Kamida, which means good tidings.

He got capital from his savings, United Nations Children’s Fund, Aqua for All, and his friends.

“The two organisations gave us the initial capital to organise farmers. The idea was that part of the money we get from sunflower oil production was to help schools sustain the water and sanitation facilities,” he explained.

Ogolla’s production plant sits on a one-acre piece of land in Rapogi in Uriri. He started off by buying a crushing machine and material used to make a filtration machine.

They successfully set up the factory which currently work with over 200 farmers from Migori and Homa Bay Counties who supply them with sunflower seeds.

The company buys sunflower seeds from farmers at Ksh 40 per kilo.

From the oil production, Ogolla makes about Ksh 2 million in profits per year.

He noted that the same can be realised within two months depending on the supply of sunflower seeds from farmers.

“We have been visiting farmers out there and mobilising them to get into sunflower farming but the main challenge has been that even after training, some farmers need support to grow sunflower,” Ogolla said.

The company has six board members while Ogallo is a director and founder.

The oil is sold locally in Rapogi, Migori, and Awendo towns and online orders from Nairobi, Mombasa, and Nakuru counties.

The oil is sold at Ksh 350 per litre, which is the factory price.

Steve Mbogo Net Worth, Properties He Owns, Controversies And Bio

David Kimani: The Kenyan Operating a Multi-Million Restaurant in the US