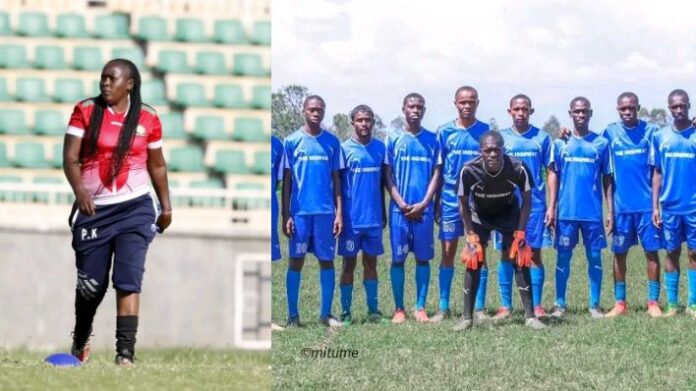 As the curtains closed on the Federation of East African Secondary Schools Sports Association (FEASSSA), Kenya’s Highway Secondary School finished runners up after being edged out by Kibuli SS of Uganda. The latter won 2-0 in a match that was played at Sheikh Amri Abeid Stadium in Arusha, Tanzania.

Despite the loss, the Kenyan side undoubtedly produced the shock of the tournament when they edged out giants St. Mary’s Kitende of Uganda 1-0 in the semi-finals. Kitende are known to silence opponents and are the region’s football kings. During the match, Highway coach Beldine Odemba was photographed standing on the touchline while maintaining sharp focus and issuing instructions to her team.

Odemba is on a mission of leaving an indelible mark on Kenya’s football sector by taking on a venture that is male dominated. She told an online news publication that she has received immense support from the school, fans and various stakeholders.

“It has taken teamwork from my fellow technical personnel, players, school authorities, fans and well-wishers to progress this far. The players do their role and play according to my instructions. It is basically teamwork,” she said.

Odemba also steered the side to the national finals held earlier this month in Nakuru. In a cutthroat encounter, Highway fell 1-0 to Ebwali from Vihiga County.

Odemba’s love for the football is something which began at a tender age as she previously played the game. She has been critical in nurturing young talents and was previously the head coach of Kariobangi Sharks‘ U-15 side. Owing to her efforts, she was in 2019 shortlisted  by WorldRemit as one of the continent’s coaches who have uplifted soccer in Kenya.

Odemba cut her teeth into coaching by first enrolling for a CAF C training module before going for a higher notch CAF B in 2021. The latter is more advanced and after 4 months of studies she went for an internship which entailed working with a top tier football side in Kenya. After attaining the CAF B coaching licence, an upbeat Odemba described the achievement as a milestone which imparted important skills such as match analysis and training of players.

Read Also:Peris Mukoko: The Woman Of Many Hats Redefining Women Rugby In Kenya

The coach has also previously been on the technical bench of Kenya’s female football team, Harambee Starlets. Early 2022, Odemba was selected to be part of FIFA Coach Education Scholarship that offered financial support, network opportunities, mentorship and career development.

Inside The Illustrious Careers Of Kalonzo’s Children

Number Of Teachers Who Have Applied For Internship Positions, Qualifications, Pay And Timelines