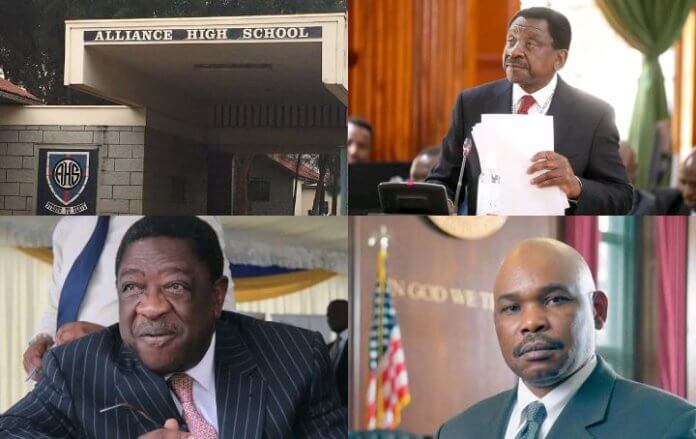 Located only 22 kilometres from Nairobi CBD, Alliance High School continues to be among the most admirable schools in Kenya.Nicknamed ‘Bush’ the school also has an amazing history behind its establishment. It was founded by Alliance of Protestant Churches which brought together a number of denominations in 1926.

Alliance became the first institution to offer secondary studies to the native Kenyans during precolonial period. Just like other pioneer secondary schools in Kenya, Alliance boasts of a unique school culture and state of the art facilities that are only but a dream in other schools.

The institution has consistently posted exemplary academic results and this is the reason why it churns out a good number of students who enrol for noble careers such as medicine and law. This article will take a look at senior counsels who went to Alliance.

Makau Mutua is a distinguished law scholar who has been described as controversial because of his penchant for speaking his mind. He has previously served as chairperson of Kenya Human Rights Commission (KHRC) before he resigned to take up the role of the spokesperson for Azimio presidential candidate Raila Odinga during the 2022 polls.

Makau Mutua: Inside The Best Hotel In Kitui Owned By Raila Odinga’s Spokesman

In 2016, Makau Mutua emerged third in interviews that were conducted to appoint Kenya’s Chief Justice who would succeed  Dr. Willy Mutunga. Mutua also served as the Dean of Buffalo School of Law (US) between 2008 and 2014. He lectures at the institution in the field of international human rights, international business transactions and international law. Mutua first studied Bachelors of Law at University of Nairobi but transferred to University of Dar Es Salaam where he graduated in 1984. He undertook his masters degree at the latter and proceeded to the prestigious Harvard University for his PhD.

Senior Counsel James Orengo is a revered lawyer and politician who has made history mostly through opposition trenches. Orengo studied at Alliance High School between 1965 and 1970 before he joined UoN to study law. He was active in campus politics, and even served in the student union.

Orengo player an instrumental role in fight for multiparty democracy in Kenya. He was elected as MP for Ugenya Constituency in 1992 and then got re-elected in 1997. In 2002, he unsuccessfully vied for presidency. In 2007, Orengo was again elected MP for Ugenya and served in the grand coalition cabinet as the minister for lands. After promulgation of the new constitution, Orengo was elected the Siaya senator twice before successfully taking a shot at the county’s gubernatorial seat in 2022.

Wako hails from Matayos Constituency in Busia County. He served as Kenya’s Attorney General between 1991 and 2011.The 77 year old studied at Kakamega School before he proceeded to Alliance High School.

Wako matriculated at the University College of Dar Es Salaam for a Bachelor’s of Law degree after he had studied economics at the University of London. He also holds a Master’s of Laws from the latter. In 2013, Wako was elected as the first senator for Busia County.

In October 2009, the United States of America gave him a travel ban for ‘deliberately blocking political reforms’ after the infamous 2007-2008 post polls violence. In November 2019, the United States State Department announced he together with his wife and child were barred from traveling to the U.S. Information on Citizen Digital hinted that The Secretary of State has credible information that Mr. Wako was involved in significant corruption while serving as Kenya’s Attorney General.

Abdikadir Mohamed is senior counsel with an illustrious career and immense achievements as far as the legal system of Kenya is concerned. As a chair of the Parliamentary Select Committee (PSC) he was pivotal in the delivery of the new constitution that was promulgated in 2010.

Abdikadir rose from a remote village in Kenya’s Northern Frontier to being elected the MP for Mandera Central Constituency in 2007. He attended Alliance High School, University of Nairobi and Harvard University. He has previously served as a senior legal advisor to the president on constitutional and legal matters.

Abdikadir is currently a partner at Abdikadir and Abdikadir Advocates. In the 2022 presidential polls petition, he represented the Independent Electoral and Boundaries Commission (IEBC) where he submitted that Kenya’s problems are mainly brought up by how we exercise our politics.

Maina Njenga Net Worth And Property He Owns