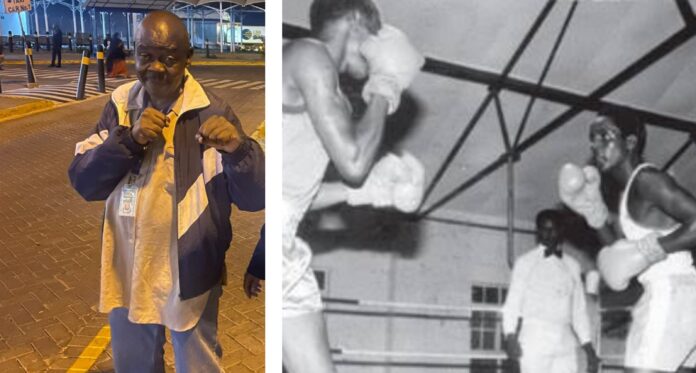 When you think Kenyan boxing, what comes to mind? Conjestina Achieng, Anthony Napuyi, Charles Owiso, John Wanjau, Philip Waruinge and Fatuma Zarika are some of the most notable Kenyan boxers that have made waves in the past, winning in various championships.

However, unknown to many, Kenya was represented in the quarter finals at the 1984 Olympics. Sylvanus ‘Sulu’ Okelo fought as an amateur, going against world heavyweight champion Evander Holyfield in the quarter-finals.

Okello was 21 years old at the time, and had done well to win his first and second rounds. He was one of three Kenyans to reach the quarter-finals alongside John Wanjau and Ibrahim Bilali who eventually won a bronze medal.

During the fight with Holyfield, Okello showed off his skills, and even landed several solid blows. However, a strong opponent and calculated blows from the end of the first round resulted in a technical knockout.

Holyfield proceeded to the semi-finals where he completely dominated against Kevin Barry of New Zealand but was later disqualified after failing to honor a referee’s whistle. Holyfield was voted as the USA sports illustrated sportsman of the year for 1984.

According to a recent tweet by Samatar Ahmed Guleid, Okello reportedly works at the Jomo Kenyatta International Airport, and is employed by Fly 540 airline.

He said he is a BOXER and his name is SYLVANUS "SULU" OKELO and fought Evander Holyfield in 1984 Olympic Games in Thailand. He saw that I couldn't believe him and he told me just Google. He works at Jkia pic.twitter.com/AwdBDOD7dd