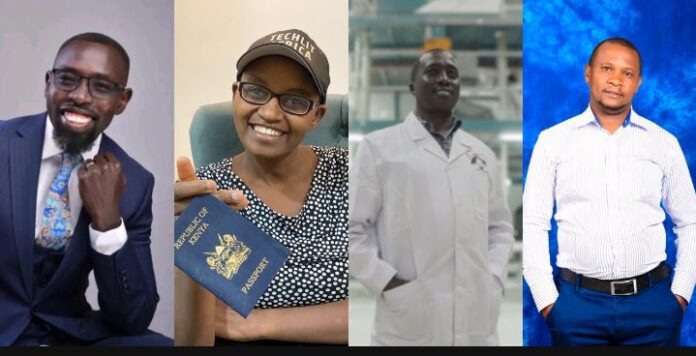 The Rift Valley region is home to thousands of Kenyans who eke a living mainly through agriculture. The expansive region has also produced Kenya’s billionaires like Zedekiah Bundotich ‘Buzeki’, Joshua Chepkwony, President William Ruto and the Moi family. Due to the rise of various urban centres such as Nakuru and Eldoret which have morphed into commercial hubs, various young entrepreneurs have also emerged from Rift Valley.

In this article, WoK takes a look at the young multimillionaires from Rift Valley and their income streams.

The 33 year old owns Buffalo Millers which produces ‘Mfalme’ brand of maize flour. The firm is located in Eldoret and has a capacity of producing 100 tonnes of maize mill daily. Growing up, Killi’s family had a challenge in getting a stable market for their maize and this motivated him to dream of starting his own milling company.

But one has to learn before earning; Killi ensured he studied mechanical and plant engineering which was in line with his purpose. He set up Buffalo Millers using a loan and initially produced only 800kg of flour which was distributed by a single truck. He has steadily established the firm into one of millers with highest output in Kenya.

Nelly Cheboi from Baringo County is the founder of TechLit Africa, a company which uses refurbished computers to empower school children in acquiring digital skills. The company has been able to impart these skills to over 4000 children from Baringo, Nakuru and Mombasa counties.

Cheboi, currently aged 29 was recognized by Forbes as one of the global top 30 under 30 influential personalities in April 2022. But the graduate of computer science is not yet done as she is on a mission of reaching out to at least 100 schools in Kenya.

Tim Kipchumba is one of the founders of Questworks which is a contracting firm that employs over 130 engineers, risk analysts and technicians. The company has interests in architecture and renewable energy (solar system designing and installation).

According to their website, Questworks has bagged various multimillion projects such as Kenya School of Monetary Studies 2MW rooftop solar design, Nairobi West Hospital expansion and Strathmore 600KW solar project. The company also built the Vivo Energy Oil Depot in Nanyuki and Pacis Centre in Nairobi. The company takes credit in delivery of one of the largest solar plants in East Africa which according to Kipchumba is able to generate 98MW of power and is based in Eldoret.

Kipchumba (37) is currently said to be eyeing the Elgeyo Marakwet senatorial seat should the incumbent Kipchumba Murkomen land a Cabinet slot.

Samson Wanjama popularly known as Samkiz is a businessman and politician behind Samkiz Construction Company in Eldoret. The firm has a fleet of trucks and produces construction materials such as concrete poles.

After high school studies, Wanjama was employed then earning 150 shillings daily. He then began selling household goods such as tomatoes and charcoal. His turning point was when he began making concrete ventilators and selling them to Eldoret hardwares. He then incepted his company, Samkiz which is headquartered along the Eldoret – Uganda road.

Trans Nzoia Senator Allan Chesang is known to have deep pockets and is even thought to be among the wealthiest people in Trans-Nzoia. He divulged in a past interview that he made his first million when he represented Kenya in a table tennis tournament held in Congo Brazzaville.  A French club then sought his services and paid him a handsome salary.

Chesang currently owns a chain of clubs with the name Club Blend located in Nairobi, Thika and Meru. He is also linked to Craft Lounge in Westlands and Garage Club in Thika. The entrepreneur is also operates a clearing and forwarding company called Uplift Express

Omar Lali Biography: Smells So Good Women Can’t Have Enough Of Him

Top Female CEOs In Kenya And The Schools They Attended

Rajendra Sanghani: The Tycoon Who Declined To Pay A Loan He Owed Jack &...