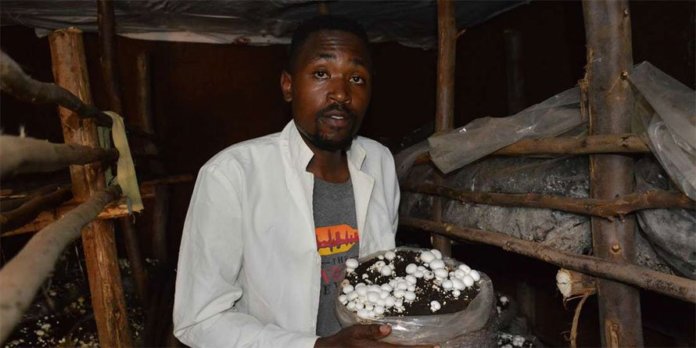 40 year old John Muchura ventured into the mushroom farming business out of necessity. He has set up four units of mushroom planting rooms at his small farm in Juja, Kiambu, a business that has been running for the last one decade.

Speaking in an interview with Business Daily, Muchura revealed that his firm, Mwamba’s Fresh Products, has been cultivating organically-grown mushrooms for customers in Nairobi and its environs.

Mr. Muchura said in the interview that he was an engineer before deciding to do farming full-time. He was compelled to do farming when he realized that his income was not enough to take care of his family.

“When I was employed, I was not getting enough income to cater for my family. Having been brought up on a farm, farming was an easy fall-back,” he said.

On his farm, Muchura has three varieties of mushrooms. These are button (white), portobello (brown) and oyster mushrooms. Growing takes place in phases. In the first phase, compost is made using wheat straws, manure, and other materials.

The compost must be turned after every two to three days to allow the manure and wheat straws to rot and for nutrients to concentrate. After seven to 14 days, the compost is considered complete when the mixture smells sweet, turns dark brown and straws become pliable.

In phase two, the compost is pasteurised to kill bacteria and weed seeds as well as remove ammonia.

From his small farm, Muchura disclosed that he harvests about 500 kilogrammes per season, which lasts between a half to two months. He added that he fetches between Sh400 to Sh600 per kilo of mushroom, depending on the season. This translates to about Ksh. 1.2 million earned every two months and Ksh. 7.2 million per year, before deducting expenses.

“I usually sell 90% of my products at the City Park Market, groceries, Westlands and Highridge in Parklands, Nairobi as well as hotels,” he says.

Muchura also said that his sales are highest during the months of Ramadan, adding that Indians and Muslims are his biggest clients.

He is however quick to caution that mushroom farming is an expensive venture to start and sustain.

Muchura warns that whereas wheat straws may cost between Ksh. 150 to Ksh. 200 during normal season time, this may rise to Ksh. 300 to Ksh. 350 in low seasons. The cost of production for one-unit mushroom house is about Ksh. 150,000, which makes it an expensive venture.

“Losses usually arise and when they occur it is usually about 100%. Generally, mushroom farming is an expensive venture because there’s an art to making the compost and they usually grow in specific parameters that are not like any other plant,” he warns.

Unlike other plants, he says mushrooms are susceptible to mold, yeast, weed, snails and rodent attacks, which impact yields.

He insists that patience is key in mushroom farming, as it is easy to lose hope during low seasons. To minimise the income risk, he trains farmers in Kajiado, and Machakos, among others, at a fee ranging from Ksh. 3,000 to Ksh. 5,000 per day, depending on the location and workload.

Cost of Breeding A Horse in Kenya

Bernard Antwi Boasiako: The Ghanaian Politician Who Wants to Buy Chelsea, Net Worth &...