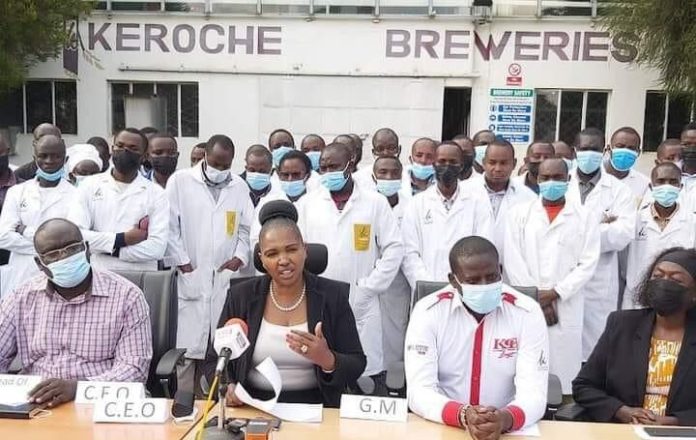 Beer manufacturer Keroche Breweries has laid off at least 400 workers.

The Kenya Revenue Authority (KRA) had shut down the manufacturer on claims that it defaulted in their earlier agreement on the settlement of tax arrears.

“I was thinking aloud on Sunday afternoon and pondering how I will relay the painful message to our employees on Monday that we will be laying them off as a result of KRA’s closure,” Karanja wrote.

In a presser last week, Keroche Breweries CEO Tabitha Karanja had warned that should the company shut down, over 400 employees and their dependants will go into poverty.

She also mentioned that beer worth at least KSh 350 million could go to waste if the brewer is not reopened in time to recover the losses.

“I plead with you, in the name of all the hundreds of innocent Kenyans whose livelihoods depend, directly and indirectly on this brewery, to allow us to reopen and resume full operations in order to keep them working and to enable us to meet our obligations to them and to the KRA,” Karanja said.

In March this year, Keroche and KRA signed a payment plan that would see Keroche settle an undisputed tax amount of KSh 957 million over a period of 24 months starting from January 2022.

However, efforts by the company to seek more time to pay the arrears had hit the wall.

“KRA has issued agency notices to the company’s bankers and instead of correctly notifying the banks of the KSh300 million we owe, it gave a wrong figure of KSh558.7 million,” Karanja added.

Speaking in a roadside rally in Thika, the former Prime Minister noted that there were people within the government who do not understand how business works.

Raila asked the government to end punitive tax measures, arguing that shutting down businesses do not only affect the investors but also the employees.

“Do not kíll the goose that lays the golden eggs,” Raila said.

The ODM leader asked the government to allow the brewer to continue with operations so as to be able to pay off the taxes.

Raila added that once elected, he would do away with punitive taxes and instead increase the tax base.

Kings & Queen Of Booze: Kenyan Multi-Billionaires Who Made A Fortune From Alcohol Business